Treasures from the antique market, and a frugal thought

There are three or four antique markets in our area where Mr. Fixit goes regularly to pick up vintage radios for his business.  This weekend our Sunday afternoon family plans got changed at the last minute, so we decided to go for a browse at the two closest ones (across the road from each other).

Usually I just look at things, especially the stalls of vintage books (there can't be that many of us who actually like looking at old school books).  But this time I found one book to buy at each place.   I am much pickier than I used to be about bringing home books from anywhere more expensive than the thrift store.  They don't have to be in perfect condition, but they have to be things I don't see all the time.  They have to be either useful (like a very cool sewing book) or have something great in them to read, or be something we need for school.  Mostly, I have to like them.  If they're early-to-mid-20th-century hardcovers with paper dustjackets, so much the better.

(These aren't my photos, but they're like the books I bought.) 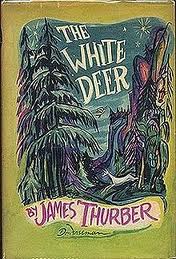 The White Deer, by James Thurber 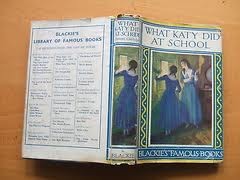 Tales of a Grandfather, by Sir Walter Scott, in the Blackie's Famous Books edition.

I know the photo shows a Katy book instead, but they're all very much the same style, with the squiggly things up the sides and the list of other books on the back.  A new paperback copy of Tales of a Grandfather would cost about $30 (Canadian) if ordered through our local bookstore, because who orders Tales of a Grandfather?  This one was $10.  Sometimes antiquing actually saves money. (UPDATE: I realized later that this Tales is somewhat abridged, which does it make it less useful than I had hoped.  But I still like it.)
Posted by Mama Squirrel at Monday, July 29, 2013