Fashion Revolution Week: How Shopping Changed, and a CM Thought 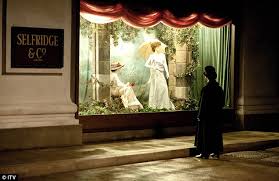 At the beginning of the first episode of "Mr. Selfridge," Harry Gordon Selfridge, in the midst of opening his own London department store, went to buy a pair of gloves at another store. He asked to see a lot of gloves all at once, which was not the way things used to be done in stores. You were supposed to know what you wanted, and have one thing handed to you at a time.The gloves clerk attempted to co-ooperate with him, but ended up losing her job over the incident. (When Selfridge found out, he hired the clerk at his own store.)

Selfridge's in the early twentieth century, as shown in the series, was something new. It was a community place, a happy place, a place where people could come to see exhibits and celebrity appearances (and buy celebrity souvenirs). When Selfridge's friend Woolworth (yes, that Woolworth) planned to open a discount store in London, Selfridge responded by offering lower-priced items in every department, so that everyone could feel part of the Selfridge's world. When the war began and Selfridge (an American) wondered what he could do to help the war effort, someone told him that he did a great deal for morale by having such a wonderful place. People cheered up just by walking in the Selfridge's door, he was assured. 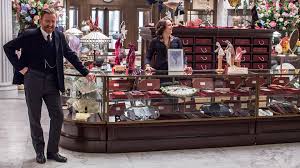 The Selfridge's experience probably isn't the one that most of us grew up with. Even in my younger days, the elegant super-stores were being replaced by malls and discount stores. I am old enough, though, to remember being "waited on" by shoe salespeople, who would measure your feet, bring shoes out from the back, even put them on you, and then try again until they and your mother were satisfied.

But the then-new concept of making shopping fun, and the mall  or store a friendly, welcoming, even seductive place: that's what has trickled down.

I keep going back to assorted bits of wisdom that Charlotte Mason put forth on shopping, making choices, getting bargains, and patronizing local businesses. She actually said a surprising amount about those issues. Her one thought that seems to stand out here is that you shouldn't go into a store, like "Mr. Selfridge's" character Lady Loxley, and say, "I need a new wardrobe. Dazzle me."  If you know you need shoes (to paraphrase C.M.), figure out what you're looking for and what you want to pay, then go buy some. End of story. Don't obsess over the search, or over getting the best deal. Look for quality (still C.M.). Think about buying local products or at least from your own country rather than imported (still C.M.). I don't think Charlotte Mason would have supported sweatshops (and there were miserable factories all over England in her day, so it was definitely an issue then too); or, at the very least, she would have looked for ways to improve the education and health of the workers.

It's not about guilt and over-asceticism, though those can creep in. It's simply realizing that every life, every choice we make, touches so many other lives. We each have the potential to make a positive difference in our small places, even in the bigger world. We can spend our lives shopping and dressing ourselves. Or we can get on with it.
Posted by Mama Squirrel at Wednesday, April 20, 2016