Notes from our Hodgepodge hostess:  "Here are the questions to this week's Wednesday Hodgepodge. Answer on your own blog, then hop back here tomorrow to share answers with the universe."

1. What's the last thing you did that could be described as 'taxing'?

Shovelling slushy snow when we should have been seeing dry pavement.

2. If you could plant a garden of anything, what would be in it?

Oh, that's fun...real or imaginary? Something to eat? How about...muffin bushes?

Or if you were serious: I would plant some tomatoes, zucchini and peppers, and hope that the bugs and critters didn't get to them before I did. We must be the only people on the planet who don't have much luck with zucchini.

3. April 10-16 is National Library Week...will you celebrate with a visit to your nearest library? When did you last make a trip to the library? What are you reading right now? What's one title on your want-to-read list?

I am having trouble even getting to our regular library because of road construction; and the one further away has to be a special trip. So I've been splitting my reading between what's already on the shelf, and the library books I can download for free through Overdrive. But the sun is shining and I might try walking over there today.

On the list of books I don't own, and that I don't think are at our library, is The Singing Bowl, poems by Malcolm Guite. And along with that, I want to actually read Twenty Thousand Leagues Under the Sea. The Apprentice (our oldest) read it for homeschool, but she read it to herself and I never got through the whole thing.

4. Share a saying or an old wives tale you heard while growing up, you believed to be true or that you paid attention to 'just in case'?

That eating anything strange before bed would give you bad dreams. It always seemed to come true in stories.


Peter and the Story Girl, so it appeared, had wooed wild dreams to their pillows by the simple device of eating rich, indigestible things before they went to bed. Aunt Olivia knew nothing about it, of course. She permitted them only a plain, wholesome lunch at bed-time. But during the day the Story Girl would smuggle upstairs various tidbits from the pantry, putting half in Peter's room and half in her own; and the result was these visions which had been our despair.

"Last night I ate a piece of mince pie," she said, "and a lot of pickles, and two grape jelly tarts. But I guess I overdid it, because I got real sick and couldn't sleep at all, so of course I didn't have any dreams. I should have stopped with the pie and pickles and left the tarts alone. Peter did, and he had an elegant dream that Peg Bowen caught him and put him on to boil alive in that big black pot that hangs outside her door. He woke up before the water got hot, though." L.M. Montgomery, The Story Girl


5. Are you a fan of onions? Garlic? Ginger? What's a dish you love that contains one, two or all three items listed?

Of the three, ginger. But honey-garlic chicken is good too.

6. Where does nurturing end and indulging begin? What are some skills or qualities you think a person needs to posess in order to be viewed as mature?

Some friends and I had a discussion about this awhile ago. Indulging is a parent having to phone their adult offspring's boss to say that said offspring is too sick to come in to work, since if offspring was not living at home, they'd have to do the phoning themselves anyway. Most of us agreed with that, although I was willing to plump for "well, there might be circumstances..."

7. What leading figure in any field would you like to hear speak, and why?

Oh, I can think of several writers and thinkers and teachers I'd wish would make a stop by here.

How about Frederick Buechner?

We get a NYT section in the weekend paper, and there was a column this week that mentioned the idea of "erasing" people, or groups of people, that we don't like. Not physically killing them, but, perhaps, moving them out of our awareness. We were watching the Mr. Selfridge television series (which I have mixed feelings about, but we're still watching it), and one storyline in the first season concerned a store employee who was let go for petty theft, who then could not get another job and was so desperate that she threw herself in front of an underground train. This caused her co-workers to wonder if they were wrong to try to "erase" this woman from their lives, because of her mistake. One of the best articles I've read this week is Compassion Needs Imagination at the Circe Institute blog. The last church sermon I heard spoke about the definition of grace (shouldn't every sermon be about grace? The Lutherans at least would say yes), and grace definitely includes compassion. The article quotes Atticus Finch and his attempt to define compassion to his daughter:


“If you can learn a simple trick, Scout, you’ll get along a lot better with all kinds of folks. You never really understand a person until you consider things from his point of view—”

“—until you climb into his skin and walk around in it.”

Which, we hope, is one of the things that reading does for us. 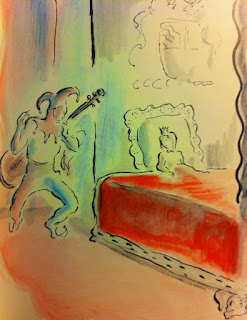 Illustration from Many Moons.

Linked from the Wednesday Hodgepodge at From This Side of the Pond.
Posted by Mama Squirrel at Wednesday, April 13, 2016

I feel like there's something to that tale about food giving you crazy dreams : ) Hope you have a great day!