Plutarch quote for the day: Get it right, you stupid bird 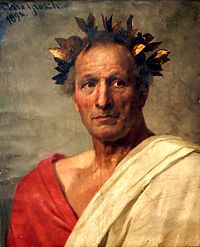 "Furthermore had not Caesar him selfe in person, and Asinius Pollio with him gone out of the campe to the rescue, and stayed them that fled : the warre that day had bene ended. There was also an other skirmish where his enemies had the upper hande, in the which it is reported, that Caesar taking the ensigne bearer by the coller that caried the Eagle in his hande, stayed him by force, and turning his face, tolde him : See, there be thy enemies." ~~ Plutarch's Life of Julius Caesar, translated by Thomas North
Posted by Mama Squirrel at Thursday, July 28, 2016

Email ThisBlogThis!Share to TwitterShare to FacebookShare to Pinterest
Labels: Julius Caesar, Plutarch, Quote for the Day