Make It Your Own, Part Five 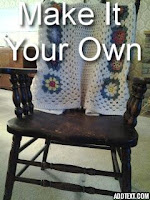 Why did I choose the photograph of the afghan and the chair for this series of posts?

Both of those objects represent our family habit of giving things a longer-than-expected life, even when we didn't intend to. I crocheted the afghan as a gift for my parents in 1987. When my mother passed away nine years ago, my dad returned the afghan to me, and it has been in our living room ever since. The chair is quite old. It was scrounged from my parents' basement, also about thirty years ago; it spent some time in off-campus university housing, may have gone back to the basement for awhile, but wound up here again. It is not the most comfortable chair in the world, unless you sit on a cushion; and the arms are a bit wobbly; but it does have character.

Last week Mr. Fixit and I were sitting downstairs in the 1960's panelled rec room (which was our main homeschooling space until two years ago); and we were talking about where the things in the room came from. I said "bookshelves, we bought those over a few years as our book collection grew; the chair and loveseat, we bought those new; the computer table was the kitchen table from your pre-marriage apartment, and we found it at a yard sale; the coffee table was here in the house when we moved in; the T.V. stand was an antique bought from a friend; the T.V. came from someone we knew who was getting rid of one," and so on. It's about the same as the rest of the house, a conglomeration. Some things we chose. Some things chose us.

And that is what I wanted to finish up the week by saying: that one secret of more contented living is just accepting and being comfortable with the things you have. Adding a cushion, so to speak. Re-heeling your boots twice if you need to (54 seconds into the video). Making the best of them. Making them yours.
Posted by Mama Squirrel at Friday, March 24, 2017

Email ThisBlogThis!Share to TwitterShare to FacebookShare to Pinterest
Labels: furniture, Make It Your Own, My Green Closet