How they found Pluto, not to mention Neptune (Book Review)

This is a long-lost treasure for homeschooled students!  "My favorite book as a kid," says one Amazon reviewer.  Another says, "I remember reading this fascinating book, a selection of Scholastic Book Services, when I was hospitalized at age 9. I still remember the nurse coming into the room way after midnight to demand that I turn off the light. I couldn't do it. Planet X had me."

"Planet X" isn't science fiction, but true science writing for kids (roughly upper elementary through middle school).  It's about, first, the search for Neptune; because something was throwing the orbit of Uranus out of whack, and the odds were that the something was a planet.  But after confirming Neptune's existence, astronomers thought there must be something more dragging it out of its normal pattern.  And after years of searching...there was our ninth planet. 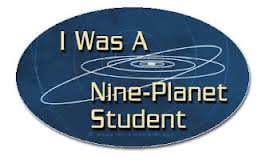 How did they do it?  Why did they do it?  Who were the key "space detectives?"  (I should be writing copy for the backs of Scholastic books.)  Clyde Tombaugh, of course, gets quite a bit of the story, since he was the astronomer who located Pluto.  (You do know, don't you, that an eleven-year-old Parent's Union School student came up with the name?)  Clyde Tombaugh becomes more than just a name, or the photograph of an old man peering into a telescope that's included in another of our solar system books; in this story, he's a curious, slightly geeky kid who can't get enough of stars and telescopes but can't afford college, but who then lucks into the job of official Planet X-searcher.  One of the reviews says that we don't know what Tombaugh thought of Simon's book, but actually there's a letter from him included as an epilogue.  It starts, "Your saga of the discovery of Pluto is told interestingly and with understanding in this book.  You have caught the spirit of the search for the elusive ninth planet..."  I think that was commendation enough.
Tony Simon pulls out the entire bag of non-fiction writing techniques here:  using images of planet-searching such as looking down at a ballroom floor full of beads, only one of which is moving; making use of fiction techniques such as dialogue; using short paragraphs, but not dumbed-down language.  Those who would like to write children's non-fiction could find this book instructive.

But I think its primary appeal would be to children who can still appreciate the romance of star-searching.  Yes, "Planet X" has been demoted to a dwarf planet; but that doesn't diminish the story of its discovery.  (And the Neptune story is interesting too.)

This would be a great addition to a study of astronomy.  The book is long out of print, but inexpensive copies are still available through online sources.

*The scientists in my family want me to mention that Pluto is no longer "Planet X," first of all because it has a name, but second because it lost its planet status.  So the search for "Planet X" goes on.
Posted by Mama Squirrel at Saturday, May 25, 2013

Wow, wow, wow. This is right up my alley. You know that. I did not know Venetia's story. Thanks for sharing.

Off to Abe right now.

At least we read the books I buy. That does count, right?