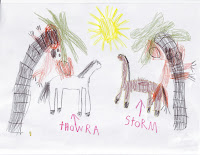 One of The Apprentice's friends loaned her Elyne Mitchell's The Silver Brumby, and then Mama Squirrel read it to Crayons. This series of Australian wild-horse stories is way above the current run of Horse-Club type chapter books; and, unfortunately, seems to be almost unheard of in Canada. There was a 1993 film version with Russell Crowe, but I don't remember it; there was also an animated series (can be seen on You-tube). I checked abebooks.com for copies of the books and found very few in Canada at a decent price; the U.S. was not much better, but there were lots of copies in Australia and the U.K. Collins Modern Classics did a reprint in 1999 but it looks like it's also out of print. There are no copies of any of the books in our library system.

The book--the first one anyway--was published in 1958. It's kind of a cross between Bambi (the book, not the Disney movie) and Misty of Chincoteague. Thowra, a cream-coloured wild horse (brumby), is born during a stormy night; his intelligent and intuitive mother knows there are great things in store for him, but that he will always be in danger both from man and other horses (because of his unusual colour). She teaches him everything she knows about running, hiding, leaping over things, and general survival; and, though most mares forget their foals eventually, she never seems to be far away and reappears several times as Thowra grows up. (He also has a lifelong friendship with Storm, another stallion who was born at the same time.) By the end of the book, Thowra has defeated the other leaders of the brumbies (the fights are described fairly graphically), has his own herd (and foals), and has just escaped--in a final harrowing chase scene--from the stockmen (cowboys) who badly want to capture him.

The descriptive passages and the language--both the Australian geographical terms and the general writing level--may give problems to younger North American readers; maybe not your average homeschooler, but those who expect something on the level of the Horse Club books. The first book does have a short glossary in the back (candlebarks, flying phallanger, kurrawong, snowgrass, etc.). Here's a sample:

"Thowra and Storm moved back on to the Main Range as soon as autumn began changing towards winter. For a while they stayed in the timbered country below the Ramshead, and often spent the lovely bright days galloping on the snowgrass between the granite tors. Sometimes there were other young horses near--and once Thowra was given quite a beating by a three-year-old stallion who came along with two or three young mares and seemed to want to fight him just because he looked different--but mostly they were on their own, and day after day was filled with a sort of wild joy....The snow was late that year, and in the clear autumn light the rocks looked purple, and the snowgums blended every red and orange and green with their ghostly silver grey. Thowra became lighter in colour as he got his winter coat, and, even more than in other winters, he looked silver rather than cream."--Elyne Mitchell, The Silver Brumby

Luckily, The Apprentice's friend owns all four books in the series and Crayons is writing her a letter (and drawing her a picture) to say thank you and ask if we can borrow the next book.
Posted by Mama Squirrel at Tuesday, January 27, 2009

Cherub 2 thought she had read "all" of the hose books out there. So she wanted to THANK YOU (and Crayons) for this recommendation.

Off to peruse the Used Book sites online.

The main character of this book, Scotty, is my grandfather!(Sorry, just had to skite a little there!)

Wow, Jeanne, that's cool! I was hoping you'd check in on this one!

Just wanted to let you know that I've linked to your post. Hope that's okay!