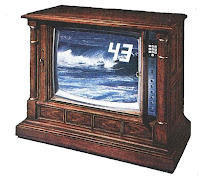 On Saturday the Squirrels went to a church rummage sale.

Mama Squirrel found a boxful of half-used spools of ribbon; two large pieces of fabric; a slightly-used package of kids' birthday invitations; a heavier-duty tote bag than the one she's been toting; a Lawrence Block burglar mystery, a copy of The Moonstone, and a 1977 book of house plans.

Crayons bought a handful of scarves.

Mr. Fixit bought a 1978 ColorTrak RCA television. Much like the one in the photo. (The very nice man at the church sale arranged to deliver it when the sale was over.)

Sometimes Mama Squirrel is glad that we are still living in our 1959 raised-bungalow nest, because there's no way we would have gotten that baby down the basement stairs of the townhouse we were looking at a few months ago. (Our garage here is at ground level and there's an entrance through it to the basement.)

And what are we going to do with a 1978 works-great floor-model TV? For now, it's going to live in the workshop. It's on wheels, you see, and for that reason it can function as a sort of very-inexpensive-thing-on-wheels-to-move-other-things-around-on. But our 1980's TV in the living room is also starting to gag and sputter a bit, so sooner or later the RCA will move upstairs--somehow, yes, I know, at that point we'll have to tackle the stairs. But that's another squirrel story.

NICE! I love Bernie Rhodenbarr but I think I have read them all. I am forever giving my husband tidbits of fascinating info and he'll say, "Is that Bernie?" It's his dad's fault, he's the one who had one laying around years ago and got me hooked.

We went to our first yard sales of the year this weekend too- 13 taper candles for my best friend and a new diaper bag for me.

Books and tote bags are always great finds! My father would have loved the TV and I have to admit that seeing it gave me a warm fuzzy, or two! My father used to own his own business repairing TV's and such. He loves those older models.

We hit a few garage sales this weekend. I got an organizer table for my boys' many many Legos and a Big Wheel for the littlest guy. We also picked up a shelf,a lamp and some clothes for Wildchild.