New books at the Treehouse

These books all came in a box from a family out west who are finishing their homeschool years and have decided to part with some treasures. Some of these books are part of the Ambleside Online curriculum (mostly for the upper years), and some are just for fun. 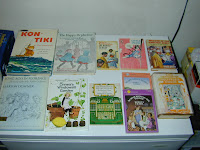 "But perhaps the most amazing thing about the Dead Sea was something I didn't discover until we began to walk into the desert hills on its southern shore. Because the atmosphere is so dense in the area, the air pushes down on the water and the water pushes down on several miles of salt deposits underneath the Dead Sea. These salt deposits are pushed down toward the core of the earth and then out toward the shore, where they sprout up in two- or three-story asparagus-like formations. They look like salt lighthouses." (p. 47)

Makers of the English Bible: The Story of the Bible in English by Cyril Davey

"But, in spite of Alfred's schoolboys learning the Lord's Prayer in their everyday language, there were few men who troubled to turn any more of the Bible into English. Books and parchments were too expensive for ordinary people to buy. The young men of Alfred's kingdom had little use for reading unless they became monks or 'clerks"--'clerk' is only a later way of spelling 'cleric', or churchman. Monks and 'clerks' could read Latin well enough, so why should they bother to turn Latin into English for people who, in any case, could not read?" (p. 21)

Long Ago in Florence: the Story of the Della Robbia Sculpture by Marion Downer

"The younger della Robbias kept the workshop open for many years. But no one in the family ever inherited the genius of Luca. No one ever sculptured children with quite as much accuracy and feeling as he did--as if each child was his own beloved friend." (p. 30)

Heroes of the City of Man by Peter Leithart

"Like father, like son: Telemachus must go, if not to hell and back, at least from a deadly threat to assured life. All the way home from Sparta and Pylos, he wonders, 'would he sweep clear of death or be cut down?'" (p. 197)

"Biblically, the belief that one can remake the world through terror and bloodshed is a heresy. Its most fundamental error is the belief that there is someone other than the Messiah whose death inaugurates a new age. The most penetrating answer to the religion of revolution is the insistence that there is only one sacrificial Victim whose blood revives and whose unleased Spirit brings not strife but peace. Only those who trust this sacrifice can have confidence that, whatever their mistakes and errors, they will not, in the end, misconstrue everything." (p. 106, on Julius Caesar)

"Now I'll tell you about my nicest plant. Her name is Busy Lizzie. That's a good name for her because Lizzie definitely is busy: she never stops growing and blooming. This is how I got my first Busy Lizzie: Mr. Bloom had a large plant and he let me take a cutting from it. That means cutting off a little branch, so that it can later take root and grow up to be a new plant." (p. 20)

"When tormented by thirst in a hot climate, one generally assumes that the body needs water, and this may often lead to immoderate inroads on the water ration without any benefit whatever. On really hot days in the tropics you can pour tepid water down your throat till you taste it at the back of your mouth, and you are just as thirsty. It is not liquid the body needs then, but, curiously enough, salt. The special rations we had on board included salt tablets to be taken regularly on particularly hot days, because perspiration drains the body of salt. We experienced days like this when the wind had died away and the sun blazed down on the rafts without mercy....On such days we added from 20 to 40 per cent of bitter, salt sea water to our fresh-water ration and found, to our surprise, that this water quenched our thirst." (p. 72)

She Wanted to Read: the Story of Mary McLeod Bethune by Ella Kaiser Carruth

"On cold days in the winter her eyes smarted from the smoke of the pot-bellied stove. The stove couldn't quite burn up the pine cones that were stuffed into it. When she got to school on frosty mornings, she was glad to stretch her hands out to it. Sometimes, even though she had run and jumped all the way to school, she was cold clear through her gingham dress. Miss Wilson would take her hands between her own warm hands and say, 'I can't let my most faithful pupil freeze.'" (p. 20)

If all the Swords in England: a story of Thomas Becket by Barbara Willard

"As they came within sight of the city, of the sturdy walls, the pile of the great church, the palace, the monastery, a huge throng rushed from the gates to meet them. They sang and shouted and wept, they called for the Archbishop's blessing. They urged him forward among them, bringing him home to his church that had lacked him too long....At every window hung silks and carpets in joyous decoration. The bells of Christchurch clashed and clamored on the clear air of the winter's day." (p. 116)

The Ocean of Truth: The Story of Sir Isaac Newton by Joyce McPherson

"Isaac found a table that spilled over with heavy books, bound in dark green and brown. For a while he enjoyed simply picking up the books one at a time, reading the titles, and stacking the books neatly on a pile. They smelled of printer's ink and leather. One volume interested him. It was by Theodore Beza, the theologian who succeeded John Calvin in the Geneva Church. He was a famous reformer of the last century. The bookseller saw Isaac hesitate with the book in his hand....He held out a book called The Institutes of the Christian Religion by John Calvin....'I'll give you both of them for a deal,' pressed the bookseller." (p. 75)

An Introduction to Shakespeare by Marchette Chute

"An actors' inventory of the period is a riot of color: a scarlet cloak with gold laces and buttons, a crimson velvet jerkin with blue satin sleeves, purple hose embroidered with silver. Every company had piles of old costumes stored away to be remodeled for the minor parts and for group scenes, but the actors who took the main roles evidently had their costumes designed for them at considerable expense. Gold lace was lavishly applied to their costumes, with copper lace for the lesser actors, and one London company ran up enormous bills with 'the copper lace man.'" (p. 58)

"It was difficult for Genevieve to round them all up when it was time to leave. She made them hold hands. She counted them five times and would not trust Josine to do it. She told them that if they did not stay together, she would never bring them back and that she would leave the orphanage forever and that they would never again be treated to chocolate buns." (p. 44)

Schoolroom in the Parlor by Rebecca Caudill

"'Well,' sighed Chris, 'have a good time, Emmy, Debby, and Bonnie in your extra recesses. I'll be sitting right here in the parlor studying how to spell alligator and crocodile and hippopotamus.'" (p. 74)

"The week before Mother had knitted the cap. It was long and red, like Debby's, with a white tassel at the end. It was soft as a kitten and warm as feathers. It was hanging on Bonnie's nail behind the kitchen stove, waiting for the first frosty day. To see it hanging beside Debby's made Bonnie feel that, at last, she was surely growing big." (p. 71)

Premlata and the Festival of Lights by Rumer Godden

"Then, once again, Prem seemed to see further, to those long ago golden and silver bangles that had been on Mamoni's wrists when they lived with Bapi and, "I'll buy her a silver bangle now," vowed Prem. She knew gold would be too expensive. She forgot everything else and took a windmill....The shopman charged her a rupee more than the peddler, but she could not stop to argue, and pushed her way back through the crowd to where she had passed the bangle stall." (p. 51)

"Miss Happiness and Miss Flower were beginning to understand that Little Plum was in the middle of some sort of quarrel, and they did not know what to wish for: that Belinda would stop climbing the ilex tree; that Gem could learn to play; 'That we should all be peaceful and happy together,' said Miss Happiness. The two little dolls were still talking it over that late afternoon when there came a sudden and determined shaking in the ilex tree." (p. 97)

Slowly the Doctor opened his eyes and raised himself on his elbow. "Where am I?" he said drowsily. "Oh, yes, of course, in jail."

Then he stared at the man who stood beside him. And at last a smile spread over his face.

"Heavens above! It's Sir William Peabody," said he. "Well, well, William! What on earth brings you here?"

"I might still more reasonably ask you how you come to be here," said the visitor...."What's it all about? They tell me you were seen throwing a woman into the sea."

"It wasn't a woman," said the Doctor.

"It was a seal," he said at last, "a circus seal dressed up as a woman. She wasn't treated properly by her keepers. And she wanted to escape, to get back to Alaska and her own people. So I helped her. I had the very dickens of a time bringing her across country all the way from Ashby. I had to disguise her as a woman so we could travel without arousing suspicion. And the circus folk were out after me. Then just as I got her here to the coast and was throwing her into the sea, so she could swim back to her native waters, one of your coastguard men saw me and put me under arrest.--What are you laughing about?"
Posted by Mama Squirrel at Thursday, April 30, 2009

You've got quite a bonanza on your hands. And it reminds me that I need to find a copy of Miss Happiness and Miss Flower to read to my kids.

We don't have Miss Happiness and Miss Flower either--we've just borrowed it from the library.

I am drolling over your treasures!