Horse parties--enough of this galloping around 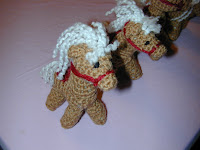 A lot of the horse-and-pony-party websites assume that you must have unlimited funds and/or local stores brimming with cowboy toys. Some peoples' descriptions of their children's parties sound more like the Calgary Stampede. We wanted to have fun, but maybe not on that scale. Still, how hard could it be to come up with a few horse-themed decorations or toys?

We went to a party-ware store that had one mylar horse balloon--and that was it, the rest of the store seemed to be all 40th-birthday parties and adult Halloween costumes.

We went to the bulk store and couldn't find anything neat or original (which turned out to be a good thing since one of the guests has peanut allergies and can't have anything from the bulk store). Jellybeans and pretzels would have been fine, but we were hoping for something sort of cool, like gummy horseshoes.

We went to the "bargain store"--like the dollar store but they charge more. They had no party stuff at all. And very few horses.

We went to the Big Z department store, looked in the toy aisle and found nothing except big toy sets. We did pick up some striped paper plates and napkins, and two packages of dried-fruit snacks.

We went to the Craft Store. All the horse stickers were in the scrapbooking section and priced accordingly. We settled for plastic harmonicas, two packs of balloons, and a Toob of tiny horses (which ended up as game prizes). Mama Squirrel also bought a big ball of brown yarn--which became horses. (Note on the harmonicas: we would probably have been better off with the kazoos they sold, since those are supposed to sound kind of bad anyway.)

(We already had stuffing and scraps of other yarn for manes and saddles. Mama Squirrel would point out that the pattern, while quite good, has a couple of quirks. There's no mention of tails, and there's also no mention of stuffing the legs--but since we didn't want collapsed horses, we thought it must have been just an omission. Also, if you'll notice, all those seven horses were made by the same person using the same pattern--and some of them are quite different, depending on how firm they are stuffed and on the angle that the head is sewn on. No right or wrong, just pointing out how much Results Can Vary.) 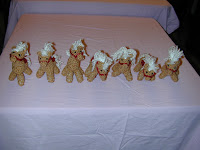 We thought we had some clear gift bags, but remembered that we used them up at Christmas. Tin pails would have been fun, but not at Craft Store prices. So Crayons potato-printed paper lunch bags (we made a horseshoe and a star print), and we filled them with the fruit snacks, harmonicas, and crocheted horses. It might have been nice to have a few other candies or smaller things, but as Mama Squirrel has already pointed out, such things were not exactly plentiful (and we didn't think we could handle any more stores).

For decorations, we blew up the balloons, put out as many horse toys and books as we could find, and sidewalk-painted horseshoes coming up to the front door. (Ponytails added a welcome message with chalk.)

And Crayons took charge of the front-door table. 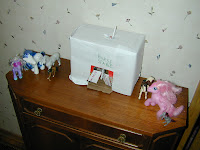 Those horses are sooo cute! Tell Crayons that Anna Sophia should be able to ride on hers- Shmoo had one of her dolls riding yesterday!