Stuff-mart comes through. Just don't make me go there too often.

We have had W--t stores in Canada for a few years.  They aren't usually my favourite place to shop--too big, too busy.  But there's a newish one near us, and we decided to do our Saturday shopping there for a change.

But wow, that is one overwhelming grocery section, especially when you're used to shopping at a discount supermarket with less choice.  (The Apprentice found it particularly funny that there was one whole side of an aisle devoted to beef jerky, peanuts, and Little Debbies.)  How can there be that much culture shock between stores only a few blocks apart?  It actually felt like we had crossed the border into a U.S. supermarket....or into the Stuff-mart on Veggie Tales.


"They're in stock! And if you need refrigerators. To keep extra mashed potatoes. Or a giant air compressor. To blow fruit flies off your dresser ..."

And speaking of mashed potatoes, guess what we found there? 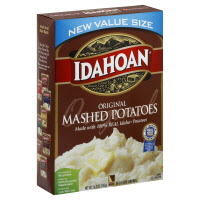 We haven't been able to find original, plain, just-potatoes, in-the-box Idahoan mashed potato flakes for quite awhile, ever since Giant Tiger stopped carrying anything except the flavoured pouch varieties.  But there you go--we bought two boxes.

We also found the doll-head-sized beads that Crayons/Dollygirl has been wanting, the exact yarn Mama Squirrel needed for mini monkeys, and a rainbow assortment of tissue paper for crafts and gift wrapping.  Also Sally's Cereals, which were new to us but which seemed like a good deal, $3 for a big bag of plain spoon-sized shredded wheat.  And Habitant soup on sale for a dollar.

Oh--and a package of red candles for our Advent wreath.  (Hoping for pink and purple would have been too much.)

What more could you ask?
Posted by Mama Squirrel at Saturday, November 26, 2011

You are fast becoming my favourite Canadians! :-) It's nice to know potato flakes are consumed all over North America.

Thank you, and welcome!