From the archives: oh, to have them so young again

First posted September, 2006. This was the first year that The Apprentice was away during the days at high school. Ponytails would have been turning nine and was doing an AO Year 3.5 that year (so using some less-usual books). Lydia (Crayons) was five and doing kindergarten.

Wednesday is our "different day" of the week--no Bible, no regular math, and it's the only day where I've scheduled computer time in for both Crayons and Ponytails.
After our regular opening (usually a hymn and prayer, often an extra like reading a Psalm together), Crayons will get 20 minutes of computer time while Ponytails does a grammar lesson (one of the Peter Pan lessons I posted about previously). Then Ponytails can use the Carmen Sandiego math CD-Rom while Crayons has her math time and probably time to read a story with me.
Next is the week's second history lesson. Since Ponytails finished her chapter about the beginnings of Ancient Egypt yesterday (some of them will take her two sessions), we're going to take a few minutes to look at extra books--Usborne's Ancient World has a good double spread about life along the Nile. She'll make an entry in her notebook--just a little writing and then enough time for a picture. Then French. I don't have a commercial curriculum this year for French. I do have a couple of storybooks that were originally written in English and translated into French--they each have about a hundred one- or two-page stories in them. This is going to be an experiment in following some of CM's French-teaching ideas--reading a very short story (or part of one), working with snipped-apart printouts of the words and phrases (making new sentences), with the goal of learning to narrate a little too. I've done this before with a couple of easy-reader books in French, but this is the first time that I've tried to base a term's work on it. The first story is called "La devinette" (The riddle), and it's about two children arguing about what colour they think their father's new car is--blue or green? (It turns out to be turquoise.)
Folk songs: A la volette (in French), and A Paper of Pins
.Snack break...
Then copywork. One perfect line for Ponytails, a couple of letters for Crayons. [Update: we did this with dry-erase markers on small-sized white boards.] 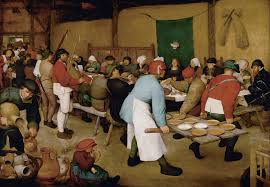 And last thing in the morning: Breugel (or Bruegel or Brueghel or Breughel), "Peasant Wedding.". That's Picture Study.

After lunch: An Emily Dickinson poem (we read a little about her life yesterday too), Peter Pan, and a nature walk before the Apprentice gets home from school. That was fun, and we had good weather for it. We just went around the block and checked out our favourite gardens and trees. We noticed that the catalpa tree that used to be covered with flowers now has big bean pods all over it. The leaves on the one oak tree that we know of are still mostly green--no acorns on the ground yet. Some of the summer flowers are gone, but most of them are still brightly coloured.
Posted by Mama Squirrel at Tuesday, September 13, 2016