From the archives: Fear of knowledge?


"We realise that there is an act of knowing to be performed; that no one can know without this act, that it must be self-performed, that it is as agreeable and natural to the average child or man as singing is to the song thrush, that 'to know' is indeed a natural function. Yet we hear of the incuria which prevails in most schools, while there before us are the young consumed with the desire to know, can we but find out what they want to know and how they require to be taught." ~~ Charlotte Mason

We recently watched "Fear Her," an episode from this past season's Dr. Who. In the classic sci fi tradition, the episode features an entity living in a little girl's head, using her brain (so that she sometimes talks in a REALLY WEIRD VOICE), and sucking up other human beings for its own purposes. 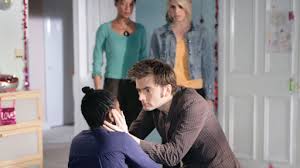 This particular entity inside the little girl's brain happens to be sustained on love and companionship--LOTS of companionship (in fact, in its natural state it has millions or billions of siblings). The problem is that it's inhaling companionship in the form of people, at an ever-increasing rate (by the end of the show, it has sucked up an entire Olympic stadium full of spectators and has plans for the rest of the world). Of course in the end (SPOILER), it finds its proper companions and joins them inside a little egg-sized spaceship, leaving the little girl free of the REALLY WEIRD VOICE.
We each have such an entity inside our physical brains (or somewhere in there): it's our mind, and it's sustained on knowledge. In its healthy state, it desires, craves knowledge; other things cannot properly be substituted. Knowledge, not information, and there's a difference: information is short term, spit back out again or forgotten, made up of facts without "informing ideas." Knowledge is long-term, swallowed, digested, processed, used. If the mind food is available, the entity will suck it up in whatever quantities are available (even Olympic-sized). It will do whatever it can to find its proper food AND YOU CAN'T STOP IT. BWA HA HA HA.
Well, you can. Unfortunately.
There is a cure for knowledge-hunger. Just like vinegar smashed up the Slitheen, if you can get hold of some Incuria it's quite easy to stop the knowledge-hungry mind.


"I can touch here on no more than two potent means of creating incuria in a class. One is the talky-talky of the teacher. We all know how we are bored by the person in private life who explains and expounds. What reason have we to suppose that children are not equally bored? They try to tell us that they are by wandering eyes, inanimate features, fidgetting hands and feet, by every means at their disposal; and the kindly souls among us think that they want to play or to be out of doors. But they have no use for play except at proper intervals. What they want is knowledge conveyed in literary form and the talk of the facile teacher leaves them cold. Another soothing potion is little suspected of producing mental lethargy. We pride ourselves upon going over and over the same ground 'until the children know it'; the monotony is deadly." ~~ Charlotte Mason

Incuria is related to the idea "not curious" and it's properly translated "carelessness," but in this sense, it means a lack of appetite for knowledge. Not caring about it. Someone who's incurious is apathetic, unobservant, careless. 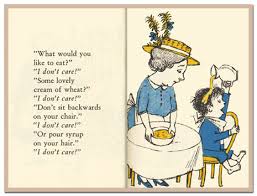 ("What would you like to eat? I don’t care. Some lovely cream of wheat? I don’t care. Don’t sit backwards on your chair. I don’t care. Or pour syrup on your hair. I don’t care.")
Where do you get enough Incuria to stop the appetite for knowledge? You can start by offering lots of screen time; provide lots of dull school lectures; and most of all, spread the idea that knowledge is Dull and Irrelevant and that anything contained in a book of over 100 pages isn't worth the trouble. You can make the entity go away or at least not bother you much.
But please don't.


"But what if all were for all, if the great hope of Comenius––'All knowledge for all men'––were in process of taking shape? This is what we have established in many thousands of cases, even in those of dull and backward children....we are so made that only those ideas and arguments which we go over are we able to retain. Desultory reading or hearing is entertaining and refreshing, but is only educative here and there as our attention is strongly arrested. Further, we not only retain but realise, understand, what we thus go over. Each incident stands out, every phrase acquires new force, each link in the argument is riveted, in fact we have performed the act of knowing, and that which we have read, or heard, becomes a part of ourselves, it is assimilated after the due rejection of waste matter. Like those famous men of old we have found out "knowledge meet for the people" and to our surprise it is the best knowledge conveyed in the best form that they demand. Is it possible that hitherto we have all been like those other teachers of the past who were chidden because they had taken away the key of knowledge, not entering in themselves and hindering those who would enter in?" ~~ Charlotte Mason