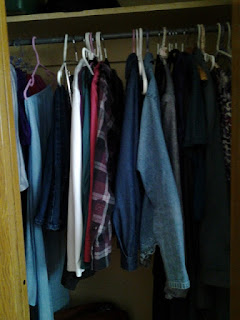 In keeping with the less-as-more theme, I'm going to make this as short a post as I can.

About a year ago, I set up my first Project 333 capsule wardrobe. It wasn't particularly cohesive or coherent; just everything I had left in my closet after getting rid of things that didn't fit or I didn't like. Even some of the remaining things got phased out, or worn out, over the next while.  Last winter/spring's list does not look much like this year's. I'm still in learning mode.