Over the weekend, Mr. Fixit cleaned out some records, sold the small cabinet that held them, and moved this 1940's Sparton console radio into the living room. 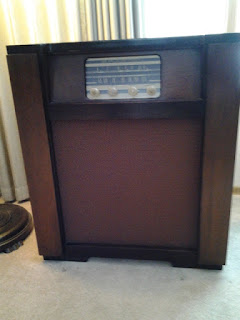 This photo is Mr. Fixit's "man cave," five years ago; the radio has been in the corner there (under the Three Stooges poster) for at least that long. Console or floor-model radios aren't something Mr. Fixit usually handles; they're not a big seller these days, and they're hard to move around (and ship). This was one he just liked and didn't worry about re-selling. 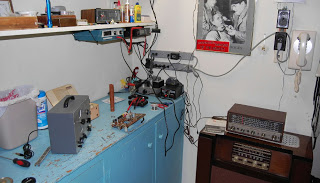 But it was time to polish it up and give it new life upstairs. 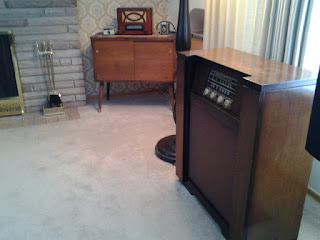 This old radio is more compatible with new technology than you'd think. It has an input on the back that can connect with a smartphone. Ponytails came over on the weekend and said she had heard a song she thought Mr. Fixit would like. He plugged her phone into the input and played the music through the radio.
Posted by Mama Squirrel at Monday, February 06, 2017