This is an approximation of what I might bring home from a good old fill-the-bag rummage sale. I haven't even been to anything like that in...how long?...but you know the sort I mean. You pay a flat fee, grab anything that looks good, sort it out later. 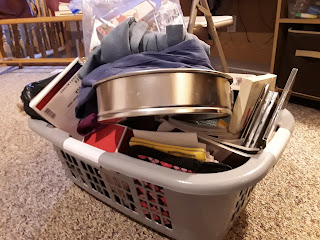 The first thing, obviously, is to spread it out and see what you've got. 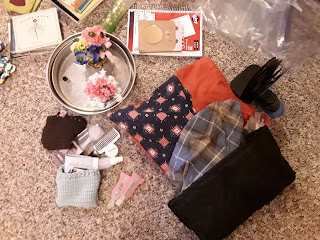 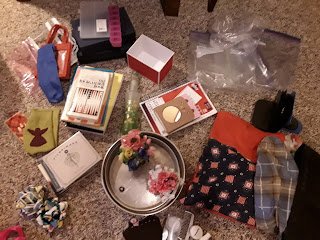 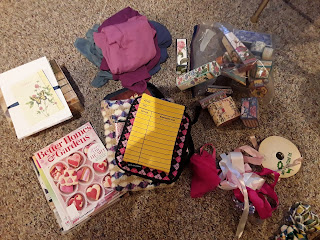 Maybe it was because I was sort of cheating by already using our own stuff, or because we don't have scads of miscellaneous unidentifiable things here (we've moved twice in the past four years); but the sorting and the putting away actually didn't take too long.
Marie Kondo says to start decluttering with clothes, so we'll start there. (Apologies that the colours are a bit gloomy, but that's because it's a snowy January  morning and the light's bad.)
One blue silk blouse, one grey-blue silk-cashmere wrap sweater, both thrifted last year; one magenta cardigan that I wore a lot last summer, one pink t-shirt also from last summer. The t-shirt and the cardigan are good "finds," because I was wanting to add more pink into the closet. The blouse and the sweater are indicators of two things: one, that I'm a sucker for lovely fabrics, and two, that I was not able to try things on in 2020, and that even silk and cashmere can't make up for tight fits and strange cuts. They did not cost me enough to cause excessive pain when I put them into a donate-when-the-stores-open-again bag. 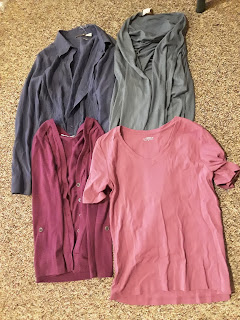 Next category: books. Three faith-based books and two about playing backgammon. We have a good backgammon set, but the way we play it is about as exciting as Parcheesi, so I remember picking those books up at different times to see if there was something we were doing wrong. Two of the other books can go by my bed (a handy place to remind myself of things I want to read). The Prayer and Temperament book was pretty quirky, but I think I'm done with it, so it can go in the donate bag. 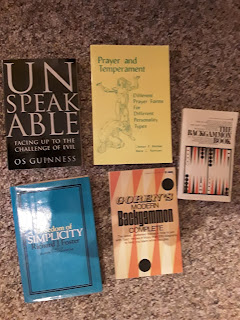 Metal bookends, from all the books we had in our old house. Right now they're just a reminder that I'm stuffing the bookcases here too tightly instead of leaving room to even need a bookend. If I knew somebody who desperately needed bookends, I'd pass them on; but since they are the sort of thing you wish you had when you don't, I'm going to keep them even if they're not currently in use. 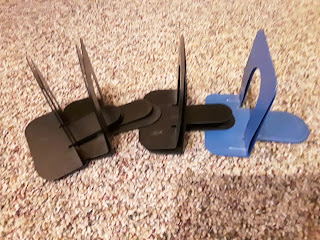 And  magazines, from a year ago. Probably the best kind to read right now. They can go on the coffee table. 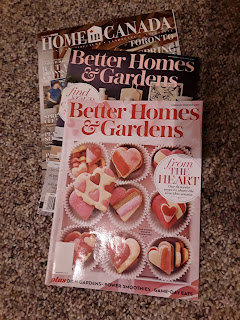 Four CDs, ditto: they can sit beside the CD player as a reminder to put them in. 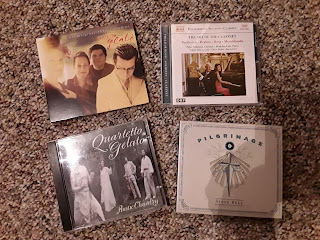 One lined notebook with only a few pages torn out (I was using that sort of notebook for my online classes). Some letter-writing paper. Two more little notebooks, one with a mirror that I have used as a decoration in the bathroom. The lined notebook can go with the office supplies; the stationery and the flowered notebook can go in the basket where I keep those things; and the mirrored notebook...not sure, but maybe in my purse, because who doesn't need a mirror sometimes? 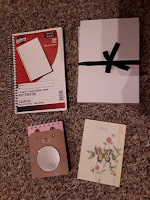 I noticed another rather obvious indicator about the past year: travel-type items that are sitting unused. The clear pouches you have to use for toiletries at airports; zipper pouches to hold tights or pens or snacks; and so on. Well, they're there when I need them. 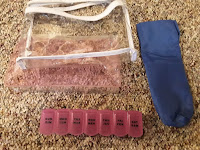 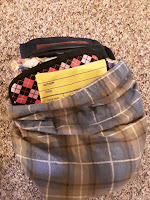 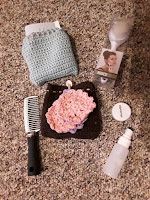 I sorted out the personal-care stuff from the travel-storage things, and used a box and a basket to corral them in the bathroom.  Travel bottles and zipper pouches went in a drawer. 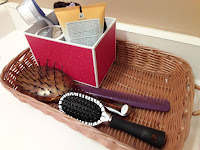 I had used these flower ornaments (old VBS crafts) and the bottle (supposed to hold things like vinegar) in the bathroom before, but I put them back in a more streamlined way, just to freshen things up. 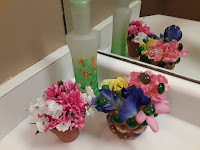 Some miscellaneous things in the pile: a heating pad that we used to use to make yogurt. I remember writing awhile back (maybe a year ago?) that yogurt-making had been curtailed because we never had powdered milk around anymore. I did buy a bit of powdered milk awhile ago, so I might experiment and see if I can still yog. 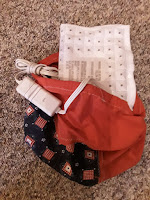 Two round cake pans and a springform pan. Not things we use a lot, especially when it's just the two of us and we're not making cheesecakes or whatever. Mr. Fixit has previously expressed the heart's desire of making deep dish pizza, though (or at least eating it), so I think I'm going to hang on to the pans and try to find a workable recipe. Maybe we'll have a pizza and backgammon Valentine's party. 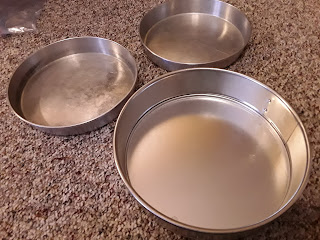 A bit of gift-wrapping ribbon and bows. On the left: garbage. On the right: store with the gift-wrapping supplies. See, I told you that was easy. 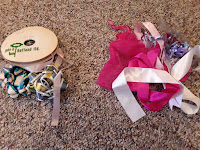 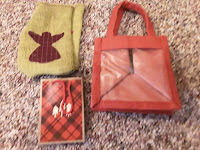 What's left from the pile of stuff? Only a couple of things, and I'll talk about them tomorrow, along with a couple of less random un-thrifts.
Notes to Self
Use the face scrubbie brush my daughter gave me.
Save out a bit of yogurt and make sure we have enough milk to try making homemade yogurt again.
Read some Os Guinness and Richard Foster.
Find out if we're playing backgammon wrong, or if it's supposed to be that boring.
Look for pizza-in-the-pan recipes. Buy pepperoni. Also buy food colouring and butter.
Eat pizza while listening to Quartetto Gelato and eating beautiful Valentine cookies from last February's Better Homes and Gardens. While wearing a pink t-shirt and magenta cardigan.
Posted by Mama Squirrel at Tuesday, January 19, 2021