My friend the DHM at The Common Room quoted Charlotte Mason today:

"There is absolutely no avenue to knowledge but knowledge itself, and the schools must begin, not by qualifying the mind to deal with knowledge, but by affording all the best books."--Towards a Philosophy of Education (Vol. 6), pg. 347

Just before Miss Mason gets to that point in the chapter, she has been describing the sad case of two young men who had a half-baked education (in her view), who "laboured indefatigably" at making sense of the books they picked up as young adults, but who admitted themselves that "You and I go at a subject all wrong!"

What was one of the books they couldn't make sense of? Alice in Wonderland.

Deeply impressed he bought the book as soon as he returned to London and read it earnestly. To his horror he saw no sense in it. Then it struck him that it might be meant as nonsense and he had another try, then he concluded that it was rather funny but he remained disappointed.

Here, again, is another evidence of the limitations attending an utter absence of education. A cultivated sense of humour is a great factor in a joyous life, but these young men are without it. Perhaps the youth addicted to sports usually fails to appreciate delicate nonsense; sports are too strenuous to admit of a subtler, more airy kind of play....

So we have to give our children more than facts, more than vocabulary drills. Knowledge, yes...the DHM's post points that out well, along with the sad fact of our culture's anti-knowledge bent. But also another kind of knowing...an understanding of laughter and nonsense that goes beyond the usual nose-picking humor found in childrens' books. They need to meet characters like my aged Uncle Arly, sitting on a heap of barley...and the Humbug...and the White Knight, one of my favourite characters in any book. They need some silliness, some furry squirrel puppets (I promise we'll do a post about Dewey soon), some knock-knock jokes, some James Thurber, and eventually some Wodehouse and Chesterton. They need to let their brains learn to play and dance and jump around with all the wonderful connections that a sense of nonsense allows. They need some nonsense so they can understand inventiveness...and a mandatory credit in inventiveness and creativity will not substitute.

I found this posted on the Catholic Culture blog:

A friend said all this reminded him of the scene in The Chronicles of Narnia where Aslan (God) creates Narnia, including an odd little bird which, like all the animals, can talk. The bird says something ridiculous and all the other creatures laugh. Turning to Aslan, the bird says, “Oh, Aslan, have I made the first joke?” “No,” Aslan replies, “you are the first joke.” My friend says there is a moral here. 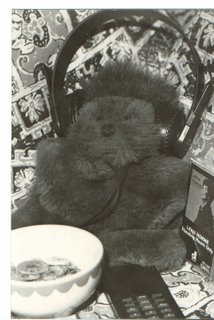