How do frugal squrrels spend a vacation? (and you're not going to believe THIS) 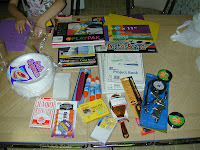 Yesterday we went to the surplus store and shopped our little squirrel hearts out. (We haven't been there for months and months, so it's forgivable.) What followed us home: several hairbrushes and related items, several packages of coloured paper and cardstock and file cards, several packages of glue sticks and glue pens, several blank notebooks, three mini packs of pastels, three rolls of electrical tape, a tool for Mr. Fixit that I can't remember the purpose of, and some other things. Mostly for 88 cents, 99 cents, $1.49 and so on.

Last night the younger Squirrelings had summer dance lessons, which happen to be in the community room at the mall. Not that we spend a lot of time generally hanging out at the mall, but it's not worth going back home in between. This week the discount department store there that starts with Z (a lot like the one that starts with W) is having a clearance on sheets--50% off already-reduced sheet sets. Which we have badly needed for awhile. We found a set for the parent-sized bed, a set for the Apprentice-sized bed, and three sets for the Ponytails-and-Crayons-sized beds. Good thing we're not fussy about colours, but we did find some good deals.

Also six drinking glasses, since we have managed to break most of the ones we had (not in a fit of violence, just occasional accidents) and weren't quite ready to start drinking out of canning jars.

OK, now for the you-won't-believe-this. Mama Squirrel needed some Post-It notes, so while she was trying to remember which end of the store had the office supplies, and trying to navigate her way over there with the cartful of sheets, she noticed...beside the barbecues and summer stuff--several aisles of backpacks and back-to-school supplies. All set up and ready to go.

People, it's not even July yet. 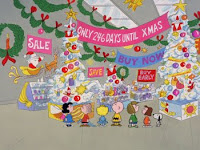 Egad. I am NOT ready for back-to-school shopping!

What's wrong with drinking out of canning jars?? Actually, the only problem I have is that in the late fall we have almost no glasses and in early summer there are WAY too many. Other than that, it's perfect:D A wide mouth quart jar is my absolute favorite drinking vessel (except maybe a 44 oz Sonic cup filled with sweet iced tea)

LOL! We actually use canning jars for drinking glasses. Exactly because we break glasses all of the time (9 children and tile flooring don't mix very well) and canning jars are easy to find and "match" with the rest of our set.