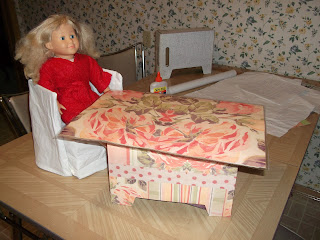 Dollygirl's dolls have been needing a table, and chairs to go with it. Doll furniture is not something we see a lot of in local stores, and the online options (new and used) are generally expensive; nice, but expensive.  So Mama Squirrel came up with some almost-free alternatives.  We used what we had; you can adapt our plans for whatever dolls (or boxes) you have. 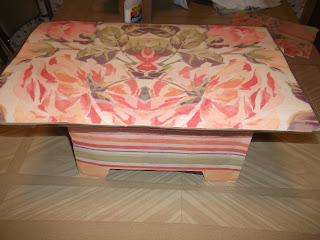 The table base was made from the insert to a two-piece cardboard file box; that is, a corrugated cardboard box 12 inches long by 9 1/2 inches high, and 4 inches deep. 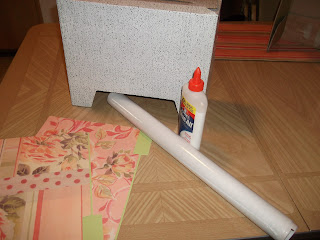 You'll notice a small cutout on each side, which I used for the legs; that's optional.  I cut the 9 1/2 inches down slightly, to about 8 3/4 inches; otherwise it would have been just a bit too high for the dolls to sit at.  I realize that not everybody is going to have the insert to a file box; but I think you could find a cereal box or other cardboard food box that would be about the right size; go for the sturdiest you can find, and reinforce it with extra cardboard or a second box shoved inside, if you think it needs it (especially if your box is not corrugated cardboard).  Whatever box you use has to be both deep enough to be able to sit firmly on its edge, and strong enough to support the tabletop and whatever you want to put on the table.
I stuffed the box with crumpled newspaper, and glued a piece of scrap cardboard into the open space to hold the newspaper in (not shown in the photos).

I glued some decorative file-folder cardboard (we found several packages of fancy folders at a yard sale) to the top and sides. 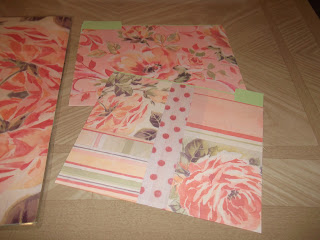 You could use scrapbooking paper, wrapping paper, or whatever else you have, and possibly add a coating of something like decoupage medium if it seems to need extra protection.  For our purposes, the folders were enough. 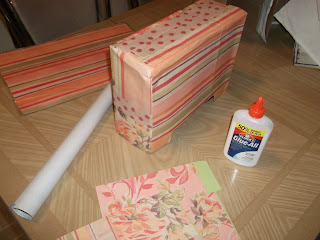 That's it for the base!

The tabletop is purposely not glued on, both for storage reasons and because I wanted to make it reversible.  I glued two of the decorative file folders (cutting off the tabs) to a piece of cereal-box cardboard, and then added clear sticky plastic on each side for protection (leaving a bit of overhang).  For the size of table base we had, a tabletop the size of a file folder was just right.  If your base is narrower, a smaller tabletop might work better. 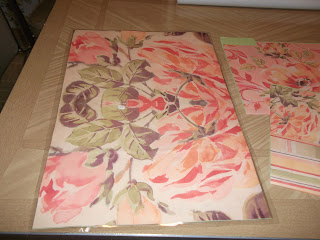 Again, you could use any kind of decorative paper or even coloured sticky vinyl; something in woodgrain might be nice.  If I were doing it again, I think I might use stronger cardboard in the middle; because what we ended up with was not much heavier than a laminated placemat.  It does work all right (the dolls have been using it now for a few days), but a more solid core wouldn't hurt. 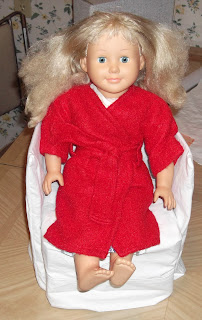 Each chair was made from two pieces of a Dr. Oetker baking-mix carton; we picked up two for free at the supermarket.  They're made like thrones, both for sturdiness and to accommodate the sitting difficulties of dolls who don't have joints in all the normal human places. 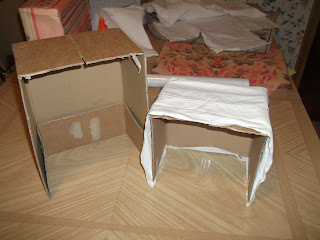 I cut a main piece from each carton, 10 1/2 inches high, 7 1/2 inches wide (although it spreads out to more like 8 inches at the open end), 5 inches deep, in the shape of a flat back with three sides; and a seat piece, same shape, 7 inches high, 7 1/2 inches wide, 5 inches deep. There were some flaps at the top of the carton, which I folded down inside the back and sides.  I slid the two parts together (didn't glue them), with the closed part of the bigger piece at the bottom, and the open part at the top.  The seat piece juts out a bit from the main piece, but I wanted it that way to give the dolls a good deep seat.  It's fine if the two pieces come from different boxes or otherwise don't match; you're going to slipcover them anyway.

I used part of a vintage white cotton bedsheet to make fitted slipcovers.  (Any medium-weight fabric would work fine.) This is MUCH easier than it sounds.  Once you have the cardboard pieces made, you use those to make the patterns, either on a large piece of paper or right on the backside of the fabric.  Trace around the back of the large piece; then flip it up and trace around it again for the matching front piece--leaving just a bit of space between the two to allow for the thickness of the cardboard.  Turn the cardboard on its side and trace each side twice, again allowing a small gap between pieces.  An optional bit I added on:  add a small amount to the very front, to make a flap that will go under the seat piece.  Add a quarter inch to the pattern edges and bottom for seam allowances.  Your pattern piece will look about like this: 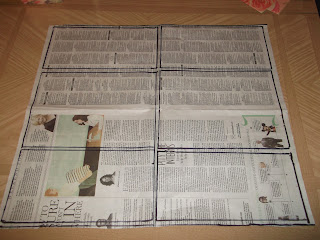 The pattern piece I made for the smaller seat section was very similar:  I traced the top, then the front, then the sides.  I really should have traced the back as well, or at least a flap going partway down the back, because if you don't, you will end up with a bit of a loose edge at the back of the seat, when you put it together.  Add seam allowances and hem allowances (unless you're using a finished edge of the sheet, which is what I did here).  The pattern piece for the seat will look like this, without the back: 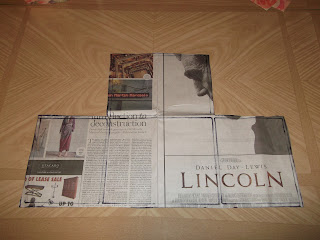 Here's what the fabric pieces look like, cut out, with the flap added to the large piece and the fourth side added to the seat piece.  You can tell the sheet was a bit wrinkled--I did iron it afterwards. 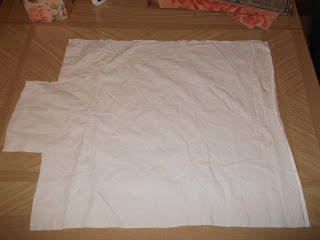 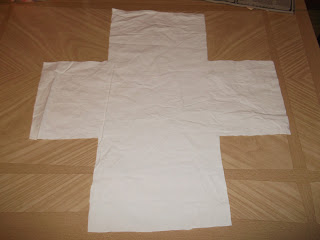 The sewing is what Adrian Mole would call dead easy.  Don't forget to turn the fabric inside out first.  On the seat piece, just sew up the side seams, then turn up the hem and zigzag that if you need to.  On the main piece, you will have two small seams that will end up on the very front edges of the chair.  If you're not sure where they go, try the slipcover on the chair, inside out, and pin the two seams closed before you sew.  Plus a hem--turn up a quarter inch and zigzag.  Don't hem the extra flap, if you made one; just start hemming at one side of it, work around, and stop when you get to the other side of the flap.

Slip the slipcovers on... 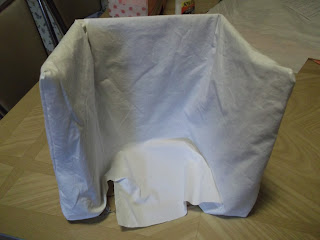 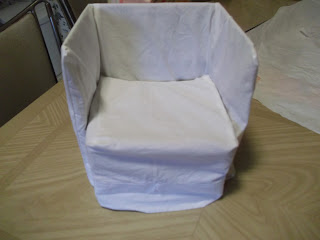 ...and that's it.  Oh--you might want to add some padding on the seat, between the slipcover and the cardboard.  You could glue some foam or batting onto the cardboard seat, but I just slipped a folded washcloth between the two.  One note: I did add a bit of tape to the back edges of the seat slipcover to help it stay put.  If you add the fourth side when you cut out the fabric, you won't need to do that.

The dolls are enjoying their new dining room!  (Dollygirl is going to take a photo of the whole thing plus dolls.)

Linked from Mad in Crafts Link Party #131.  Also linked from Festival of Frugality #366.