"Ask me, ask me": Teaching in the CM Classroom

Charlotte Mason's form of education is often seen, in fact promoted, as simple, natural, and relaxed.  At one time it was misunderstood by many homeschoolers to be just one step short of unschooling.  In some ways, the "simple and relaxed" idea is quite true.  It definitely takes the pressure off a teacher to understand that the act of learning has to happen in the child's mind; that education is not all about detailed lesson plans and clever activities.  It takes some pressure off the children to realize that they're not expected to complete pages of busywork, and that they're being asked to tell back what they understood from a reading, not answer a slew of questions.

However, there's another side to CM-style lessons that we, being mostly limited to hundred-year-old written descriptions of the curriculum and classes, can sometimes miss.  I haven't yet seen the DVDs of CM teacher Eve Anderson, and the link to the Perimeter Schools site that was offering them seems to be non-functional, so I guess I won't be seeing them anytime soon either.  But from what I've heard, her presentation, for instance, of a Picture Study lesson on Vermeer, was something of a surprise:  CM homeschoolers have commented on how much she talked before she let the children look at the picture. 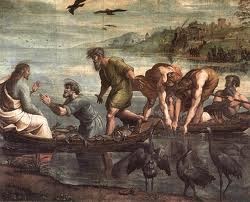 This lines up quite well with K.M. Claxton's description of what she called a "Picture Talk" lesson, given in 1915 to a demonstration class of 17 (!) children ages 8 to 11 (see the link at the top of this post).  The term's painter was Raphael, and the painting was "The Miraculous Draught of Fishes."

First off, she asked what the children already knew about Raphael (they had already started their term's work so would have done at least a couple of art lessons.)
Second, she told them a story about the history of the painting.  (The story as told in this online book may be closer to the way that Miss Claxton told it.)
Third, she read them the story about the fishes, from the Gospel of St. Luke.
THEN, only then, the children studied the painting and described it.
Miss Claxton gave "a few appreciative words" about the painting.
Finally, the children drew "the chief lines of the composition."

This pattern of asking, and then presenting a bit of something to get the students interested in the lesson, seems a lot to ask of a homeschool parent who might have several children doing different lessons, who might not have read all the books ahead of time, and who and might or might not have any idea herself about the history of any particular Raphael painting; but it seems also to be, unfortunately, the way the Parents' Union School did things.  We can't cross it out just because it is more work for us or because we don't like it.  The original Programmes don't specify or explain much about this, they just give book titles and page counts; but considering that we have seen both a "live" example (Eve Anderson) and written examples (e.g. Miss Claxton), it seems that if we don't present at least some of our lessons in this way, our students will be missing out.  Note the difference here, though, between what Charlotte Mason called "getting up a lesson," meaning that the teacher was the lecturer for the whole lesson, and these outlines, which do require some preparation or a bit of research ahead of time, but which are still book-centered.

Here are more examples from the morning that Miss Claxton spent with these 17 youngsters, none of whom she had ever seen or taught before:

In Natural History, the term's book was Life and Her Children, by Arabella Buckley. (Full text available here.)
The asking: The children told her what insects they were studying, gave her some examples, and told her the four stages in the life cycle of these insects.  She told them that today they would be learning about different kinds of Two-Winged Insects or "Flies," and asked the children to name the kinds of flies that they knew.
The hook:  Miss Claxton had (bravely, we think) toted along two daddy-long-legs in a jar, and had the children look at some details of their anatomy.
The reading, starting on page 262 (sounds like the children read):


These "balancers" tell us that the two-winged flies, the gnats, mosquitoes, midges, bluebottles, house-flies, and cattle-flies, are not made on a different plan from the four-winged insects, but are merely flies whose hind wings have lost their size and power, while the front ones have become stronger and larger. This has evidently been no disadvantage in their case, for they have flourished well in the world, and myriads are to be found in every town and country, while their different ways of living are almost as various as there are kinds of fly. Some, such as the daddy-long-legs, suck the juices of plants, some suck animal blood, some live on decaying matter ; while in not a few cases, as among the gadflies, the father is a peaceable sucker of honey while the mother is bloodthirsty.

Among the gnats and mosquitoes the father dies so soon that he does not feed at all, while the mother has a mouth made of sharp lancets, with which she pierces the skin of her victim and then sucks up the juices through the lips. Among the botflies, however, which are so much dreaded by horses and cattle, it is not with the mouth in feeding that the wound is made. In this case the mother has a scaly pointed instrument in the tail,"" which she thrusts into the flesh of the animal so as to lay her eggs beneath its skin, where the young grub feeds and undergoes its change into a fly.

For we must remember that every fly we see has had its young maggot life and its time of rest. Our common house-fly was hatched in a dust heap or a dung heap, or among decaying vegetables, and fed in early life on far less tasty food than it finds in our houses. The bluebottle was hatched in a piece of meat, and fed there as a grub ; and the gadfly began its life inside a horse, its careful mother having placed her eggs on some part of the horse's body which he was sure to lick and so to carry the young grub to its natural warm home.

At this point they narrated what had been read so far.  Miss Claxton showed them drawings of the life cycle of the gnat.  They were allowed to examine these and discuss them.

Then two children read this section out loud:


But of all early lives that of the gnat is probably the most romantic, and certainly more pleasant than those of most flies. When the mother is ready to lay her eggs she flies to the nearest quiet water, and there, collecting the eggs together with her long hind legs, glues them into a little boat-shaped mass and leaves them to float. In a very short time the eggs are hatched and the young grubs swim briskly about, whirling round some tufts of hair which grow on their mouths, and so driving microscopic animals and plants down their throats. Curiously enough they all swim head downwards and tail upwards (g, Fig. 90), and the secret of this is that they are air-breathing animals and have a small tube at the end of their tail, which they thrust above water to take in air.

This goes on for about a fortnight, when, after they have changed their skins three times, they are ready to remodel their bodies. Then on casting their skin for the fourth time they come out shorter and bent and swathed up, but still able to swim about though not to eat. Meanwhile a most curious change has taken place. The tail tube has gone, and two little tubes (p t, Fig. 90) have grown on the top of the back, and through them the tiny pupa now draws in its breath as it wanders along. At last the time comes for the gnat to come forth, and the pupa stretches itself out near the top of the water, with its shoulders a little raised out of it. Then the skin begins to split, and the true head of the gnat appears and gradually rises, drawing up the body out of its case. This is a moment of extreme danger, for if the boat-like skin were to tip over it would carry the gnat with it, and in this way hundreds are drowned but if the gnat can draw out its legs in safety the danger is over. Leaning down to the water he rests his tiny feet upon it, unfolds and dries his beautiful scale-covered wings, and flies away in safety.

Finally Miss Claxton showed them some empty pupa cases, and asked them to narrate the life-history of the gnat, which they did.  They all promised to go out and look for gnat eggs and larvae.

The world history lesson that Miss Claxton taught was based on two chapters of The Awakening of Europe, one of the Story of the World volumes by M.B. Synge.  I won't go over all the things she asked them (you can read the article yourself), but she did have a few questions about what they already knew.  She described one of the main characters and showed them a portrait.  I think because it was a one-shot class, she decided to read to them first from Chapter 1, and had them narrate.  Then she showed them a map (drawn on the blackboard) with certain towns marked, and as well as pointing them out, she mentioned which ones had been in the news recently (this was during World War I).  Then she read them the later chapter on "The Siege of Leyden" and possibly a bit from the next chapter (it's not quite clear where she stopped.)  The lesson finished with another narration.

The pattern begins to appear, and you know, it's something that's not all that hard for us in the 21st century to copy--easier, in some ways.  I don't have to fill up boxes of clipped pictures, or spend that time hand-drawing a map. At the click of the keyboard, I can access the portrait of a king, the map of a battle site, or the photograph (if I can't find the real thing) of a gnat pupa.  Do you notice how relatively short the readings are, too?  This is not onerous study.  And we all know that a lesson should be narrated, right?  However, it does seem also to be expected that the children are going to be able to tell you the what's and who's of what they've learned previously, and I think sometimes we, the parent-teachers, might slip back in that area.  It's okay to ask them.  Miss Claxton said so.

(It's also interesting to compare Miss Claxton's notes with those of another teacher using different chapters, same books.)
Posted by Mama Squirrel at Saturday, February 23, 2013

I'm obviously mining your archives. This is excellent as is the linked Parents review article. Thank you for all your research and writing.

Mine away! I found this lesson very enlightening myself.