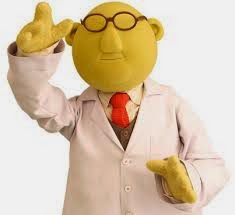 Yes, we are still using Exploring Creation With General Science (Apologia, first edition) this school year. When The Apprentice did this book about ten years ago, I had her do the study guides and the tests.  With Dollygirl I think we have done one or two of the tests, but that was it.  I am more interested in having her pick up the big ideas in the book than memorize every component of DNA.  We also don't do a lot of the experiments, either because it's the wrong season, we don't have the stuff, or it just doesn't seem worthwhile because you can figure out ahead of time exactly what's going to happen.  You know that if you leave a jar of chicken broth on the counter for a couple of days, it's going to get all cloudy and gross.  We would rather eat the chicken broth first and just imagine the rest.

I also find one particular thing irritating about this volume, and I don't know if it's been improved in later editions: it could have used some editing to take out a large amount of repetition, and also the too-frequent phrase "You'll learn more about this when you take Biology."  That pops up about as often as references to Mr. Pipes' wiggling eyebrows in Douglas Bond's books, and if you don't get that, never mind.

However, there is one thing I do like about the book, and it's one of the main reasons we're using it.  It encourages the "science of relations."  One topic works its way into another one, just like real life.  It's a bit like Charles Kingsley's Madam How and Lady Why in that way; in Kingsley, a conversation can start with a rock on the ground, and end up talking about prehistoric oceans and sea life.  In this book, we were talking about geology in Module (Chapter) 6, which led to fossils in Modules 7 and 8, and because fossils had to come from living things, that led to the question "What is Life?" in Module 9, and then classification in Module 10.  Both of those modules kept coming back to the question of cells: cells that did not have organelles but did have DNA (Monera), animal cells with organelles, plant cells with organelles; and then the idea that "all life forms have a method by which they take energy from the surroundings and convert it into energy that helps them live."  Every living body makes food from something else.  And the big word that's coming up is:  COMBUSTION.

Well, before that, we do have to get through some basic human body components: bones, muscles and skin.  The chapter compares our physiology to that of other organisms.  But then we get into Module 12: Energy and Life.  How do organisms get their energy from food?  Didn't you always want to know that?  Isn't that more relevant than ever in these days of trying to force fast-food restaurants to post the calorie counts of milkshakes and burgers?  What actually gets burned for energy?  There's a discussion of carbohydrates, fats, and proteins, and our basal metabolic rate...and all this combustion happens within the cell.  Does that amaze you, get you excited to think about how this is more than just a lesson on digestion?

We are, as we've been told, fearfully and wonderfully made.  If any science book, textbook-shaped or not, can get that idea across, I am content.

I heard Jay Wile speak over here a long time ago and that was one of the reasons I got his science books. He loves science and he loves teaching it.

Oh, I am so glad to hear someone else say that about the religion and, "You'll learn more about that in ..." It was so painful, and my twins were so turned off by it that we almost didn't even try Exploring Creation with Physical Science. So fat, it's not like that at all. Hope it stays that way.