Too much construction where we live--they're building an LRT line through the city, and a lot of places have become difficult to get to, or the parking's half gone, or there's too much traffic because some other route is closed. We live a short drive from one library branch, but it's now too hard to get there unless we walk (and there never has been a bus in that direction from our house), so we end up driving to another branch further away. This is supposed to "help the environment," how?

Oh, and we've suddenly lost our house-to-house mail delivery, just on our own block, because we don't have a sidewalk on our side. When I asked the Canada Post person how we should break our way through the snowbanks* to get around the corner to the new community mailbox, she said, "I guess they assume you'll drive there."

I throw up my hands.

*We don't have any snow right now, but during a normal winter, climbing across and through the built-up snow on the lawns (including what's been plowed out of the driveways) is something you might want to try only with a small toboggan or a mountain-climber's pick. And wearing hipwaders.
2.  Each year Time Magazine names a 'Person of the Year', someone who has 'for better or worse...done the most to influence the events of the year.' It was recently announced they've named Angela Merkel Person of the Year for 2015. You can read more about this year's selection here. Your thoughts? If you were in charge, who would you declare Person of the Year?

I have no particular opinion about Angela Merkel or Time Magazine. In Canada, the Person of the Year would probably be Justin Trudeau. Worldwide? My husband would probably vote for the Pope.
3. Do you have a nativity set in your home? If so share it's history and how you display the pieces. 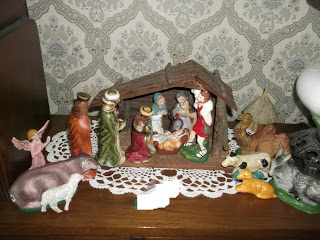 This was the Nativity scene my grandparents displayed on top of their television set. (There wasn't really any other good place for it.) It's a "dime store set," probably bought during the 1940's. I think a couple of the pieces were switched or added to over the years, probably when an over-enthusiastic grandchild broke an angel or a sheep. This is the way it was set up a couple of years ago, but this year I am trying something different.

I linked to a photo post about Nativity scenes earlier in the week, but here it is again if you missed it.

4.  Do you make an extra effort to give back in some way during the holiday season? How do you encourage those who need encouragement this time of year?

And I still send cards through the mail. Fewer than I used to, though.
5. Who is your favorite person to shop for? Why?

I can't think of any one person--my family, collectively. Or maybe it would be my three nieces/nephews in another province, since they're the only little ones on my gift list and therefore an excuse to buy picture books. Even if we do get gouged for postage on packages. (Canada Post, again.)
6. What's the last delicious thing you ate? 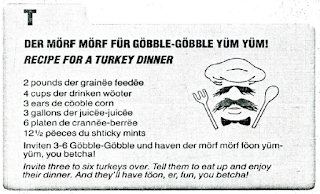 Music comes to mind, but I think there's too much of it and most of it either isn't very good or it's overplayed...or people are listening to it only through earbuds, which doesn't exactly spread anything. So to be more specific: music that people play together, sing together, or at least really listen to together.
8. Insert your own random thought here.

Mr. Fixit and I had a conversation the other day about how a certain kind of "cultural" Christmas celebration seems to be on the wane--thinking back to the days when the schools, the public buildings, the media were all about Christmas during December. That's changed, for many reasons, and some of them are good reasons, but we miss some of the external markers we used to have. As Kermit the Frog once said, "Life would just pass in a blur if it weren't for times like this." But in a way it's good, because it forces Christians to depend less on the externals (we can live without watching twenty Christmas specials on T.V. and making twenty kinds of cookies); it makes us have to think harder about reclaiming Advent and Nativity, how we can do that in a way that goes beyond nostalgia and warm family fuzzies. Maybe we should be grateful for the gradual de-emphasis on a Christian holiday, the lessening of expectations that everybody celebrates in the same way. Ugly and overplayed as its remnants (office parties and other obligations) may be; it's not as much out there now, so we have more freedom to make whatever-it-is happen for ourselves. 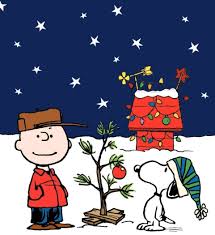 Linked from Have Yourself a Merry Little Hodgepodge at From This Side of the Pond.
Posted by Mama Squirrel at Wednesday, December 16, 2015

Carla from The River said...

I am visiting from the Hodgepodge.
Merry Christmas - Carla

Anything involving Doritos sounds like a winner to me. Hope you and yours have a Merry Christmas!

I like getting Christmas decorations - like your nativity passed down. It makes me remember my loved ones. Wishing you a Merry Christmas.

The nativity is sweet. I'm sorry about your mail. That sounds like a hassle! I hope you and your family have a very Merry Christmas!