Probably some of each. Last year we had the first big round of transitions:  the end of homeschooling (meaning new school for Lydia, new things to do for me); the Apprentice's internship which turned into a permanent job, and her move to The City; Ponytails' graduation from high school; Mr Fixit's foray into the antiques barn; other ends and beginnings. So you could say that 2016 will be different because it (obviously) isn't going to contain any of those things. But give it some time: we're only a week into it.
2. January 6th is National Technology Day. Currently, what is your single biggest struggle or frustration when it comes to technology? 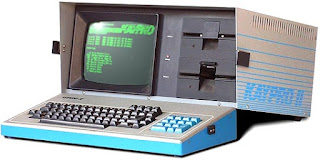 The parts of it I understand and use quite well, vs. the things I'm quite clueless about. I bought my first computer in 1986 (I was one of the first students on my dorm floor to have one: see photo), and I was sending e-mails from work not long after that. In the early 1990's, Mr. Fixit had a small computer set up to dial into the public library, so that I could put books on hold. We've had Internet here for almost two decades. But I have never had my own cell phone, because I've never really needed one and it would be an extra expense, and I'm very stupid about using them when someone yells "can you just pick up that call for me?"
3. It's that time again...time for Lake Superior University to present a list of words (or phrases) they'd like to see banished (for over-use, mis-use, and general uselessness) in 2016. You can read more about the decision making process here, but this year's top vote getters are-
So (at the start of every single sentence), conversation (as in hotly debated topics where we're invited to 'join the conversation'), problematic, stakeholder, price point, secret sauce, break the Internet, walk it back, presser, manspreading (common in larger cities where some men take up the entire bus or train seat by sitting wide), vape, giving me life (refers to anything that may excite a person or make them laugh), and physicality

Which of these words/phrases would you most like to see banished from everyday speech and why? Is there a word not on the list you'd like to add?
We saw a story about this list on the news, and Mr. Fixit says his least favourite is "join the conversation." Some of them I've never heard anyway, so I don't know if they should be banished. "Problematic" sounds ugly and ungrammatical.

I would rather talk about something more interesting, like the periodic table.

5. Let's talk fifty shades of gray. As in the color. Gray is currently a popular color in home decor, paint, wardrobes, hair, wedding party attire, and more. Are you a fan? Do you have the color in some variation in your home or wardrobe?  Gray hair, the old gray mare, gray matter, gray area...which gray idiom can you most relate to right now?

Hair? Not interested yet. But I would think about it in clothes if I could find some gray that didn't wipe me out. My biggest problem with gray is just deciding how to spell it. Gray? Grey? British/Canadian spelling is supposed to be "grey," but I see it both ways and can't decide which to go with.

6. Certain foods are considered 'lucky' if eaten on New Year's Eve or New Year's Day. Cooked greens to bring economic fortune, black-eyed peas or lentils also symbolize money, pork which symbolizes progress, fish for good luck, and if you're in Spain 12 grapes at the stroke of midnight. Did you eat any lucky foods on the first day of the year? Is that a tradition in your home? Of the foods listed, which most appeals to you?

We went out to an Asian/sushi restaurant and ordered a bunch of little dishes, so I probably did eat something on the list. I liked the fried udon, and that's pretty close to Japanese lucky soba noodles. 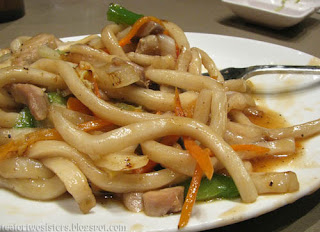 7. What's the single biggest time waster in your life and what, if anything, will you do about it this year?

Still thinking about that one.

8.  Insert your own random thought here.

Linked from So It's the Hodgepodge at From This Side of the Pond.
Posted by Mama Squirrel at Wednesday, January 06, 2016

We were with college friends over the weekend and were remembering the days of Fortran, spending all night in the computer lab because you had one tiny error in a program, and sheets and sheets of the green paper. Technology has come a long way : ) Happy new year!

"Walk it back", ouch, that's dangerous! (so much of that in politics these days).

It's not a phrase I've ever noticed much, but now I'll probably hear it everywhere.

Oh, I don't think I've ever heard it, but it caught my attention by how ugly it sounds, it's a worldview in a capsule, don't you think? Walk it back, walk it back... don't go there in the first place! -end of rant!