20 Things You Should Read (Book Review) 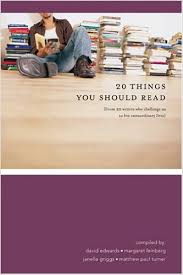 In Dante's visit to heaven, he sees images in the form of something like candles, that turn out to be the spirits of believers. Some of them, including Thomas Aquinas and St. Benedict, speak to him and try to answer his questions about faith. Near the end, in Longfellow's translation, Dante says:

From that time forward what I saw was greater
Than our discourse, that to such vision yields,
And yields the memory unto such excess.

Even as he is who seeth in a dream,
And after dreaming the imprinted passion
Remains, and to his mind the rest returns not,

Even such am I, for almost utterly
Ceases my vision, and distilleth yet
Within my heart the sweetness born of it...

Dante admits a huge and understandable reluctance, shared with the reader, to leave this experience behind, even with faith that someday he will return. In the meantime, David Edwards et al offer a few more voices from the Christian "cloud of witnesses," which might have made up extra Cantos if Dante had been able to stay longer.

On my shelf I have a thirty-year-old Penguin paperback called Part III: The Christian Testament Since the Bible.  In spite of that heretical-sounding title, it's simply a compilation of great writings from the Christian tradition, with little or no commentary or explanation. I also have a book by Terry Glaspey about books that Christians should read, which tells you about the books, but gives only brief excerpts. 20 Things tries to hit a middle ground: each writer is given a short introduction, and then it's turned over to them for several pages apiece. The decision to include only the chosen twenty may raise a few eyebrows: G.K. Chesterton, but not C.S. Lewis? Karl Barth, but not, say, Francis Schaeffer? However, twenty it is, and every single excerpt is worthwhile, even Karl Barth. Like a conversation between the spirits in Paradiso, themes and thoughts are repeated. Ideas of faith and salvation jump out like online "word clouds." Even contradictions seem to recede in the constant emphasis on simple and pure love of God.

In fact, the writers included are so powerful that they make the additional material seem a bit lacking, almost coarse by comparison (although I think it improves throughout the book). Pop culture references and phrases like "They were undoubtedly amazing multitaskers back then" are aimed at the "twentysomethings" who are assumed to be the target audience of the book. It's a bit of a jump from Dante's "tour guides" Virgil and Beatrice. But it does help to have at least some introduction to less-familiar writers.

I can say I read the whole thing; but can I possibly say I did justice on one reading to St. Augustine, John Calvin, Frederick Douglass, and A.W. Tozer? This is a book I'll be going back to.
Posted by Mama Squirrel at Friday, January 15, 2016