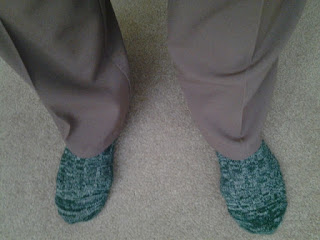 1a. I went to the thrift shop to drop off our large load of board games, and bought a sleeveless top and a nice-but-too-big summer skirt.

1b. I hemmed a pair of thrifted dress pants (photo), and took in the waistband of the nice-but-too-big summer skirt.

1c. I have never considered myself a minimalist, or at least an intentional minimalist. (Being a tightwad is not necessarily the same as being a minimalist.) Recently, though, I've been reading some of the Project 333 posts: that is, cutting down what you wear (daytime clothes, shoes and accessories) to 33 items for a 3-month period. I didn't have much more than that anyway (and in some respects not enough). But just going through the thought process of it was interesting: for instance, the idea that you might own six scarves (or whatever), but decide to wear only two of them for the next while. Then when you switch things around and pull out one that was stored, it feels more like having something "new." Much like rotating children's toys: it gives them a chance to better appreciate what they have. Or eating seasonally: we get fresh plums only in late summer and fall, so they're anticipated and enjoyed during that time.

It also gave me a better sense of what things to look for at the thrift shop (got enough x, fresh out of y). 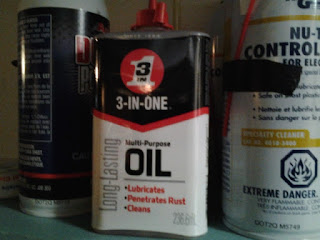 2. Mr. Fixit found a can of 3 in 1 oil on clearance. The funny part is that he just finished off his grandpa's old can of oil. Grandpa died the year we were married, so that's what you call really making something last.

3. Lydia has a part in her school musical next month. She had to supply her own shoes, by this week, and they had to be Victorian-style Oxford shoe-boots with heels. Miraculously, a pair in her size showed up on a clearance table for $12. (Maybe next year they should put on "Barefoot in the Park.")
Posted by Mama Squirrel at Saturday, January 30, 2016

I so wish I had the talent of sewing. A too-big skirt for me would have gone right back in the donation box. (Bowing to your skill)

Well, it's lucky for me that my tops usually go *over* the waistband. This one took a couple of tries, and it's still not the way a proper seamstress would do it. But for an inexpensive thrifted skirt, I don't mind messing around with the seams.