From our Hodgepodge hostess: "Here are this week's questions to the Wednesday Hodgepodge. Answer on your own blog then spring back here tomorrow to share answers with the universe.  See you there!"

1. What are two or three expectations you have of yourself?

Oh dear, you're not starting us off easy this week!

And I'm honestly not sure how to answer that one. Are expectations different from wishes, goals, or things we take for granted?

2. In what way does your outdoor space need sprucing up this spring?

It's too early for gardening here. But we have been doing a bit of yard raking and cleanup, since the last snow melted: Mr. Fixit makes the piles, I fill the bags.

Yesterday we saw the first violet in the yard.

3. According to this site (Roadtrippers), six of North America's most wondrous waterfalls are-Webster's Falls in Ontario, Upper Whitewater Falls in North Carolina, Havasu Falls in the Grand Canyon, Multnomah Falls in Oregon, The Lower Yellowstone Falls, and Niagara. Have you seen any on the list? Which one on the list would you most like to visit? Prettiest waterfall not on the list that you've seen in person? 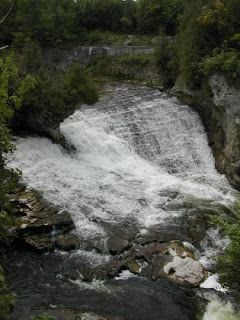 I haven't even been to Webster's Falls, although that's the closest of those on the list. But I have seen Niagara Falls a few times, and Montmorency Falls in Quebec. I like the Elora Gorge Falls, also in southern Ontario.

4. Looking back, what's something you wish you'd done as a teenager?

5. Ham...yes please or no thank you? If you said yes please which of the following do you like best-baked ham with all the trimmings, a ham and cheese sandwich, prosciutto with melon, a ham biscuit, a bowl of split pea and ham soup, or a slice of pizza topped with ham and pineapple?

Ham (pork in general) seems to be unfashionable now, but we still eat it. Not "with all the trimmings," usually, but just baked in a roaster, and then the leftovers made into sandwiches the next day.

6. Are you typical of your generation? How so?

Another tough one. I would say somewhat yes, somewhat no. Most women my age have spent more time working away from home than I did, although some of them may be winding down their careers. Some of them already have grandchildren, but we're not there yet. I do blog, but don't Facebook; I don't go to a gym or jog. But if we're talking about fiftyish mindsets compared to thirtyish or twentyish...yes, I think I'm more like my own age group. I grew up when phones were attached to walls, and we used to go to our trailer without any phones whatsoever...or an answering machine at home. T.V. shows were on once a week (and if you missed an episode of Mork and Mindy, maybe you could catch the rerun later in the season), and photocopies were something maybe your dad could get done for you at the office, if you asked nicely and didn't need too many. Computers were something you wrote programs for in tenth grade math class (and they came with tape recorders to hold your work). Record clubs actually sent records. Gift certificates came on paper, not plastic cards.

It's not that we haven't kept up with technology and the times, it's more that we remember when there were other ways to do things.

7. April rolls in at the end of the week, and in keeping with that theme...'act the fool', 'nobody's fool' 'a fool's errand', 'could have fooled me'...which foolish idiom most recently applies to you?

One of my favourite poems right now is Eliot's "The Love Song of J. Alfred Prufrock." In spite of being done to death in English classes, it's quite marvellous, and Anthony Hopkins does a great job reading it. It's about many things, but one of them is worry about getting old (he says the eternal footman is holding his coat and snickering), people's expectations, trying to see or talk about things beyond the everyday routine, but worrying either that he'll look like a fool or just be ignored.


No! I am not Prince Hamlet, nor was meant to be;
Am an attendant lord, one that will do
To swell a progress, start a scene or two,
Advise the prince; no doubt, an easy tool,
Deferential, glad to be of use,
Politic, cautious, and meticulous;
Full of high sentence, but a bit obtuse; At times, indeed, almost ridiculous—
Almost, at times, the Fool.

It's definitely a random week. There are scenes or two I'd like to see start, but I'm trying to be politic, cautious, and meticulous. I'm waiting for certain things to transpire, another shoe or three to drop, before I can make plans for more than just the stretch of road immediately ahead. But, on the other hand, who can ever do much more than that?

Linked from No Foolin', It's the Hodgpodge at From This Side of the Pond.
Posted by Mama Squirrel at Wednesday, March 30, 2016

I tell my girls all the time how I had a phone attached to the wall and whenever my dad thought I'd talked on it long enough, he'd grab one end of it and reel me back into the kitchen. Times sure have changed.

Hmmm...#8 has me curious!! Looking forward t seeing you on Saturday!
~lisa

I have happy memories of talking with my friends, the phone chord stretched around the kitchen corner into the dining room. Course I do love my cell phone too : ) Most of the time anyway! Have a great day!