Christmas 2016 update: I made this for Christmas Day brunch, in the slow cooker (four hours on high, cut the potatoes fairly small), and it worked fine. I also left out the sugar and cut the pepper in half. 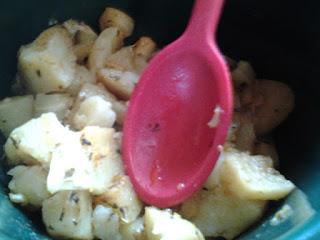 The ranch dressing mix is from Stephanie O'Dea's book More Make it Fast, Cook it Slow, but I've cut it in half for this recipe. The mix doesn't appear on her website, and I haven't found it anywhere else, although there are lots of other ranch seasoning mixes out there. Most of them use dill, and this one doesn't, which is one reason my family likes it. If you have some other ranch or seasoning mix you like, give it a try instead.Ranch-Spiced Potatoes
Ingredients:6 to 8 medium-sized potatoes, peeled and cubed (large dice)1/4 cup butter or margarineSeasonings, to total about 1/4 cup:1 tsp. kosher salt1 tsp. dried minced garlic or garlic powder1 1/2 tbsp. dried minced onion, or onion flakes1 tsp. black pepper (or less)1 tsp. sugar (optional)1 1/4 tsp. paprika1 1/4 tsp. parsley flakesOptional: sour creamGrease a large casserole dish or pan (it doesn't have to have a lid). Put the potatoes into the pan. Melt the butter or margarine and mix in the combined seasonings. Stir into the potatoes. Bake uncovered at 400 to 425 degrees F for about 45 minutes, stirring once during cooking, and probably when you take them out to make sure they haven't stuck to the pan. You can add in some sour cream near the end of the cooking time, but we don't usually bother.
Posted by Mama Squirrel at Tuesday, December 27, 2016