1. What color is prominent in your home? Are you glad about that or wishing you could cover it up or remove it?

In our new apartment, we have a lot of browns, beiges, and greens. The carpet is light brown and the walls are "neutral." If I wear beige myself, I disappear. But in the living room, it works fine. 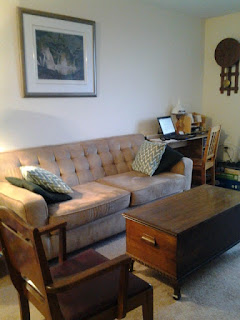 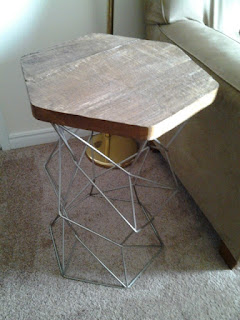 This side table is new, from Ten Thousand Villages. Mr. Fixit did the choosing and I did the carrying, in case you want to blow up any more gender stereotypes (see #3).

(I thought about including a photo of the stereo, but I've already done that.)
2. What's something you'll NEVER do again?

The last university course I took, right after I got married, was a summer crash credit, Marriage and the Family. One of my essays was on the theme of non-stereotyping children. Little did I know.

When we had kids, I was the one who stayed home to care for and later homeschool them. It only made sense: Mr. Fixit was the one with a steady job with benefits, and we wanted the kids to be at home, not in daycare. Our oldest, at a very young age, liked to go outside and "help Daddy"; but I was startled when she told me that I couldn't come along on one of their adventures, because "wimmens stay in the house."

The ironic part is that, in spite of my lack-of-career, lack of a driver's license, and lack of support for certain "wimmens'" causes, more than one of the girls has said that, to them, I seemed like a feminist. Maybe it was because my role as the at-home parent was viewed as the choice we had made, but not as the only way families could arrange things. Maybe because they were homeschooled, they heard "that's a boy thing" or "girls can't do that" less often than most girls. We tried to give all the Squirrelings room to explore whatever interested them: hairstyling, model rocket building, dressing dolls, electronics, voice lessons, photography, quantum physics. We read books with both male and female main characters, and had discussions about the history of women-as-persons, hiring and pay equity, education, voting, and so on.

They also had a father who blew off a few male stereotypes by enjoying housework (he's better at it than I am, I fight with the vacuum cleaner) and not caring much about sports (I am the one more likely to turn on a Blue Jays game).
4. May is Motorcycle Awareness Month. Have you ever owned a motorcycle? Ever ridden a motorcycle? If the opportunity presented itself would you hop on a motorcycle and go for a ride?

One ride behind someone else, too long ago to matter.  Motorcycles are too noisy for me.
5. If someone wanted to understand you, what should they read, watch, and listen to?

Mr. Fixit says about me:  "Read Lunch at the Homesick Diner." He means this book.
6.  Insert your own random thought here.

This has been fun to write, but I know it has been a hard week for many people in the world. Some of the hard things are in the news, some have happened in the lives of people I know.


"This sharp, heartbreaking realization of our condition silences all argument and hair-splitting rationalization. It makes us simultaneously recoil from God, because we realize that he also sees us for what we are, and yet we reach out for help and refuge in him." ~~ Dallas Willard, The Spirit of the Disciplines


Linked from the Wednesday Hodgepodge at From This Side of the Pond.
Posted by Mama Squirrel at Wednesday, May 24, 2017

love your header (or whatever it is called) picture - what a great view from the porch. Hope you get to see that everyday!

Most days, except when it's foggy: then it's like being inside a cloud.

Yikes! Sorry about the pitcher. That couldn't have been pretty. Have a wonderful week.

It was a long time ago and I had a severe case of pregnancy brain.