Notes from our Hodgepodge Hostess: "Here are the questions to this week's Wednesday Hodgepodge. I'm going to try a 5-question format this week. Several of you said you felt seven was too time consuming on a regular basis anyway so let's see how this goes. Rest assured there will always be one to make you think, because what fun is the Hodgepodge if every answer comes quickly and easily?"

I have trouble sometimes grasping the fact that I've been a mother for a quarter of a century. That all those baby things we learned are now so, so yesterday's news; that some of the baby gear we had now pops up on Pinterest as "vintage" and "remember when." When we had our first homebirth, midwifery had no legal status here, midwives couldn't deliver in hospitals, and you paid out of pocket. Now it's all covered under provincial health insurance, and midwives have to be licensed.

2. In May we celebrate teachers (May 9) and nurses (May 6) both. Most every family has at least one in their midst, so tell us something (or a few things) you appreciate about the teacher or nurse on your family tree.

In the 1930's, my grandma was a young nurse in our (then) small local hospital. One day a pair of twin boys were born, small and needing special care. She had no idea that one of them would become her son-in-law, my dad.

She gave birth to at least one of her own children at home, defying the norms of her time. She did not like the obstetrics nurse who was working at the hospital, and did not want the "twilight sleep" medication that had become common, so she bribed a doctor she knew to do a home birth.  I think she was a bit of a groundbreaker for making one's own health choices!

3. Chicken salad, egg salad, tuna salad...which would you go for if all three were on the menu? On bread or a bed of lettuce? If you answered bread, what kind of bread would make it the perfect sandwich?

I would eat any of those. When I met Mr. Fixit, we used to go to Reggie's Sandwich Factory. We named our first hamster Reggie Lou in honour of those lunches.

4. Do you have a desk? Is it organized? If so, share your secret to keeping it that way. If you don't have a desk, where in your home do you take care of family paperwork and business? Where do you normally sit to blog?

I do not currently have any desk at all. We just moved into an apartment, and we're still figuring out who does what where. 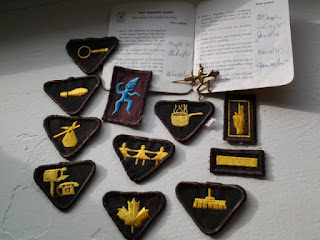 I was a Brownie. I was busy doing things that Brownies did to win a Golden Hand and a few badges for my sleeve (this was before badge sashes appeared). According to the little book I saved, I spent the year I was nine finding points on a compass, sewing on buttons, wrapping and tying parcels, practicing stove safety and first aid and "the rules of courtesy," whatever those were. The badge with the magnifying glass is the most worn (as in, most washed), and contrary to appearance it was not earned for bug inspection but for a dolls-of-other-countries collection. I started out with a few, and then, you know how it goes, it was my "thing" and people kept giving them to me.  Those dolls are all long gone, and I don't even remember them all, except that I had a pair of Greek dolls a lot like these, and I wish I had hung onto those. Not that I know what I'd do with them... 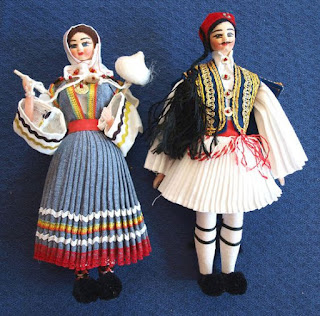 Who says guinea pigs aren't smart? We have lived here less than a week, and Muffin already identifies the sound of the fridge door with FOOD.

Linked from The Wednesday Hodgepodge at From This Side of the Pond.
Posted by Mama Squirrel at Wednesday, May 10, 2017

My daughter is expecting and the improvements in baby gear between now and the year she was born are staggering. Someone else mentioned scouting in their answer and I was also a girl scout when I was 9. My mom was the leader one year, but not sure if it was that one or not. Enjoy the rest of your week!