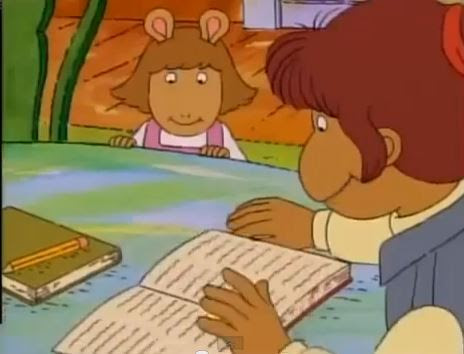 Here's the 20-second version: Arthur and his little sister D.W. have an episode-long war of words, mostly involving bigger and better adjectives for each other. D.W. has a dream in which she meets The Saurus (get it? he looks like a dinosaur), and she is told the ultimate name to call Arthur. When she uses it, Arthur melts, and she realizes how destructive their game is. She wakes up, and they make up.


D.W.: Nobody told me you'd melt! Arthur!
She scoops him up in her Mary Moo-Cow cup. What's left of him, including the glasses, speaks to her from inside the cup.
Arthur: Calling people names can be dangerous to their health.