"...do we recognize that the proportion of Love must be preserved as duly as the proportions of Faith?" (Ourselves, Book II, p. 21)

An instructed Conscience-judge is not tolerant of court employees who take time off for personal distractions. Anyone caught humming "I Just Want to Be Your Everything" will be severely scolded, and that includes friends to friends, princes to courtiers, even parents to children. Why?

"Over-fond and exclusive" relationships, besides being unhealthy, "shut out other claims of duty and affection" (p. 21). They can even be dangerous. Being exclusive is good in certain matters, Mason admits, such as in being faithful to one's spouse.  Deep loyalty to friends is admirable. But to be obsessed with any person, and needing to control their actions as proof of mutual love, is "unchaste."

In Chapter IV, Mason gives a literary example of friendship-done-to-excess, from Marlowe's play Edward II. Here's a slightly more recent example: the shapeshifting character Odo, employed as the space station security chief on Star Trek: Deep Space Nine. Odo is a loner; he seems to be part of no recognizable species. He is excited when  he finds that there are others of his kind, that he is, in fact, part of a "Great Link," a melding of all such beings. This, in itself, is fine; it means that Odo has a "family"; it could even be taken as a metaphor for the Body of Christ. But this newfound connection causes conflict. Vulcans can perform mind-melds, but this species can body-meld or "link" with each other; and in Odo's case, his fascination with linking causes him to ignore relationships, his job, and time itself. Odo eventually regains his sense of proportion, but these events cause others to question his loyalties; and (SPOILER) his initiation into linking eventually threatens the existence of his species (think virus).

(Now here comes the real spoiler. If you've never seen the ending of Deep Space Nine, and still plan to, don't read this.) During the series, Odo also finds true love with the space station's second-in-command, Major Kira. Although their relationship has a lot of bumps, they both discover something about love: they cherish, but don't need to possess each other. In the last moments of the final episode, Odo makes the decision to sacrifice his happiness with Kira to save his species (although they caused a war and don't seem to deserve his help) by fully entering the Link, possibly forever. (It looks like he's swimming out into a lake.) She understands and accepts his choice. That is love. 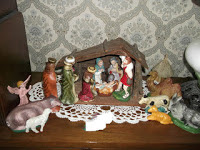 "Let Christ himself be your example as to what your attitude should be. For he, who had always been God by nature, did not cling to his prerogatives as God’s equal, but stripped himself of all privilege by consenting to be a slave by nature and being born as mortal man. And, having become man, he humbled himself by living a life of utter obedience, even to the extent of dying, and the death he died was the death of a common criminal. That is why God has now lifted him so high, and has given him the name beyond all names, so that at the name of Jesus “every knee shall bow”, whether in Heaven or earth or under the earth. And that is why, in the end, “every tongue shall confess” that Jesus Christ” is the Lord, to the glory of God the Father." Philippians 2:5-11, J.B. Phillips New Testament