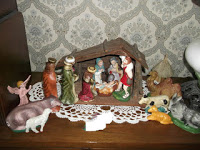 In the next chapter on The Will, Charlotte Mason gets controversial on some side issues that we can quickly dispense with. Her ethnic musings towards the end of the chapter are not vital to our understanding of the topic.

So let's stick to defining one of the true C.M. distinctives: drawing the line between Will and Wilfulness (or Willfulness, as the spellchecker prefers it).

Years ago, a visiting missionary at our church talked about her childhood. She grew up in a conservative Christian home, on a farm, and had very few opportunities to "sin," at least in any interesting ways. "But," she said, "I had a nice way of getting my own way." Nobody would have called her a "strong-willed child"; her superpower was being a sweet little girl. She did not stomp her feet and throw tantrums; but she did know how to work situations and people to get what she wanted. Was she Wilful, or was she acting with Will?

Mason can't seem to hit, at first, on the right literary example to show exactly what she means by the Will and Wilfulness. After wandering past a few kings and Bible characters, she narrows it down to the brothers Jacob and Esau. The difference is not which one is sneakier or more untrustworthy, or even which one is more appealing or generous, but only which of the two is "at the mercy of his appetites and his chance desires. Esau must needs have that red pottage...or do whatever his desires move him towards at the moment" (p. 130). So, the first definition of people acting without Will is that they want instant gratification, and that they are at the mercy of chance desires for shiny things. They are marshmallow-choosers, impulse shoppers and even "inordinate novel-readers!"

Here's what Mason says about Jacob, and it's not the description you normally hear:

"Jacob, too, gets his way, often by subtle means, and every subtlety brings its chastisement; but he does not seek his way for its own sake. All his chance desires are subordinated to an end––in his case, the great end of founding the kingdom of promise. The means he uses are bad and good. 'Few and evil are the days of my life,' he complains at the end, so sore have been his chastisements; but, always, he has willed steadily towards an end outside of himself" (p. 131).

So a second definition, or un-definition, of those who act with Will is that they don't always make good moral choices. Recently we watched a few episodes of an old BBC crime drama called The Sweeney, about a squad of police officers who use various means, sometimes morally questionable, to take down criminals. This raises tough questions about how far police should be able to go to protect the community; and, in fact, the real-life team that inspired the show was investigated later for its breaches of ethics. Acting with Will, Mason says, won't necessarily make you morally good, and you may have to face the consequences of those choices.

A life based on Will also won't guarantee success or fame. But people can be very successful without exercising Will. Mason uses Napoleon as an example of someone ruled by ambition and vanity, living for personal ends, and not by the desire "to shape his life upon a purpose" (pp. 132-133). Here's another literary example:


"What a fine study, again, we get of Will and Wilfulness in that crusaders' camp in [Scott's novel] The Talisman! Each of the princes present was engaged in the wilful pursuit of personal ends, each fighting for his own hand. And Saladin looked on, magnanimous of mind and generous of heart, because he was a man of will, urged towards ends which were more than himself. I can hardly conceive a better moral education than is to be had out of Scott and Shakespeare. I put Scott first as so much the more easy and obvious; but both recognise that the Will is the man."

More than ourselves. As Charlie Brown shouts to Lucy, "That's It!" (Imagine Lucy flying through the air...)

And our later-to-be-missionary? Based on this definition, she was not acting with Will at all. Ironically, when we met her (and I think she was about eighty at the time), she was best known for promoting a teaching about submitting our wills, and willing to be made willing. But that is a different will, for another time.
Posted by Mama Squirrel at Friday, December 14, 2018