Wednesday Hodgepodge: On the March

1. Is March coming in like a lion where you live? Aslan, Simba, Elsa, The Cowardly Lion...your favorite 'famous' lion?

Yes, so far we've had strong winds and we still have lots of snow. Not unusual, but tiresome.

I have never, ever had a gym membership, and don't intend to get one.

I drink plain coffee without all that extra coffee shop stuff.

And I still have a blog.

3. What item that you don't have already, would you most like to own? Any chance of that happening soon?

A new couch. The one we have was in the basement at our old house, then we moved it upstairs to the living room, then  to the apartment four years ago, then  to the townhouse almost two years ago. It has a spring that would be popping out of its back if it weren't against the wall. Last winter we were starting to browse local furniture stores for possible replacements, but that got put on hold; and right now we have other financial obligations. But maybe later this year.

4. March is National Flour Month...are you a baker? Cookies-cakes-or pies...your favorite sweet treat to bake? What's the last non-sweet thing you made that called for flour?

When the girls were young, I used to bake all the time. Now, not so much. 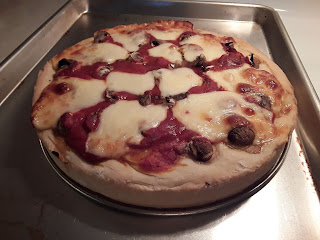 5. There are 31 days in the month of March...where were you and what were you doing when you were 31? If you haven't hit that milestone yet, then tell us where you were and what you were doing 31 months ago? (if math is not your thing, that would be August 3, 2018)

The year I was 31 was almost a quarter-century ago. I was busy  homeschooling a kindergartner, having a baby, and moving to a new neighbourhood.

August 3, 2018? Consignment-store shopping. That store was around for years, but it never re-opened after the first lockdown here last year. Much missed.

Do you prefer paper notebooks, journals, scrapbooks, or some electronic version? My life seems to have a mixture of both. I will send people birthday e-cards because I know then they don't have to deal with more paper; but a friend of mine sent me a very springy-looking paper card today, and it was delightful. Paperless isn't always the way to go.

I too drink plain coffee; a couple years ago when I began intermittent fasting, it was one of the things you could have while on a fast so I ditched the Starbucks overpriced stuff. Though every now and then I do treat myself. And doesn't it seem like the oddball thing to keep a blog now? How crazy.

It's black coffee at our house, too. It's been interesting to see where everyone was when they were 31. Seems like we were all very busy. Happy March to you!

I agree, paperless is not always the way to go; my opinion may be biased however as I'm married to a printer and the printed page is our livelihood. I use and enjoy both digital and paperless communication.

I much prefer real paper cards and letters. Sometimes I keep them. My dil always sends cards.
Loved your answers to #2!