Of old books and great-grandmothers

(Reposted to include the photos, now that we have a faster connection and can get them uploaded!)

October 1st was a rummage sale at one of those churches that always has good rummage sales, and usually a big book table.

We got there fairly late in the morning, which doesn’t usually matter much. We have odd enough tastes in old things that what we like is usually still there by the time we get moving on Saturdays.

But there didn’t seem to be any books. Strange, but maybe books were too much of a hassle to deal with? So I asked, and they said, “There were lots of books! But someone just came in and bought them all!” Every single book at a church rummage sale? “It’s never happened before! But we couldn’t say no!” Well, it saves repacking all those books that didn’t sell!

But Humph. And I was hoping to post something in response to all those lovely posts of the DHM’s about her library-sale-to-end-all-library-sales. Not the-book-to-end-all-books, of course. Just one or two interesting finds?

Well, I did get an abridged cassette version of David Copperfield. (I guess Mr. Buy-them-out missed that one.)

But since I don’t have else anything brand new (or should I say old) to post about, I’ve employed The Apprentice and her digital photography skills to show you some books that we already had. 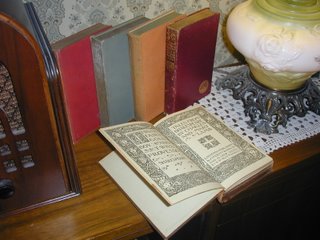 I really like the old Everyman’s Library editions “bound in cloth with gilt design and coloured top,” but they don’t photograph well, especially when the covers are a bit faded.

These are some old books that will be familiar to Ambleside Online users. The yellow book is To Far Cathay, by William C. Bagley Jr., a story of Marco Polo (published in 1935). My schoolteacher great-aunt had it on her shelf for forty years and then gave it to me; both The Apprentice and Ponytails have used it for school. The brown book is Canada’s Story, by H.E. 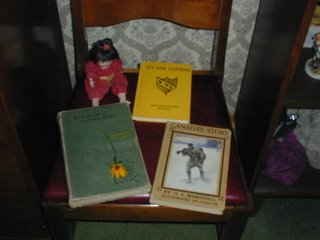 Marshall, part of her Empire Story collection. And the green one is Volume 1 of Anna Botsford Comstock’s Handbook of Nature Study (published in two volumes, this printing from 1924). The inscription in it says “Jennie M. Gaskill, Bryn Athyn, Pa.” Jennie Gaskill was an author as well (there are scattered online references to her), and Bryn Athyn is a bastion of the New Church (the Swedenborgians). But how did the book get all the way up to a used bookstore in Ontario? I was browsing in the nature section (this was several years ago) and thought, wouldn't it be amazing if...and there it was. I pulled it off the shelf, not knowing what it was (the spine is unreadable). (I did look for the other volume too, but it wasn't there.)


Abiding in Thee reminds me of The Country Diary of An Edwardian Lady, except that it’s all Christian verse, illustrated with watercolours of flowers. It was printed in Toronto and has an inscription from 1900 (my great-great-grandmother’s name). 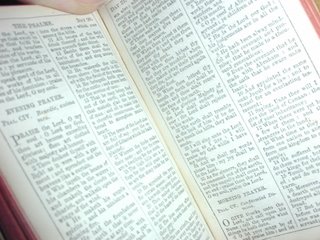 The smallest one is a Book of Common Prayer with metal edges and the findings for a clasp (the clasp is gone though). It was printed in England and it has very small print (I feel sorry for older people trying to make that out in poorly-lit churches!).

The other small book, the dark brown one, is older; it’s A Selection of Psalms, Hymns and Anthems, with a really interesting inscription: the same great-great-grandmother’s maiden name, and then “Pew No. 30, St. Paul’s Church, Yorkville, C.W.” Do you know what C.W. stands for? Canada West; that’s the pre-Confederation name for Ontario. That date’s confirmed by the book itself: it was printed in Toronto in 1861. 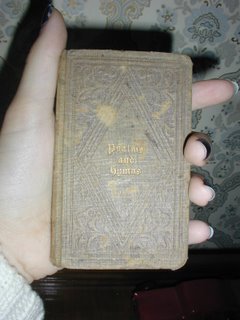 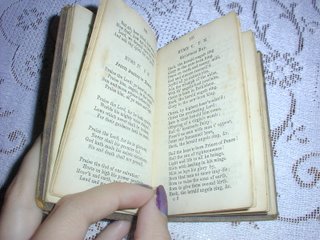 The fourth book is only about sixteen pages long. It’s called “I Am the Way,” from the “I Am Series” published by the Toronto Willard Tract Depository. No date given, although there’s an inscription in the front cover, to my great-grandmother from her cousin Lizzie, so I’m guessing from that and from the style that it’s from around the turn of the last century. It’s meant to be a 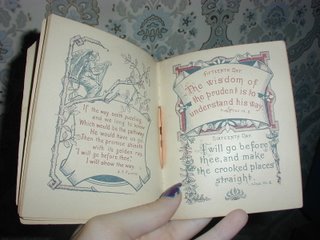 month-long devotional, almost like a copy-book. Each day’s saying or verse is separated by scrolls and borders that make the verses look like framed mottoes in Victorian parlours. One page says, “Fifteenth Day. The wisdom of the prudent is to understand his way. Prov.14.8. Sixteenth Day. I will go before thee and make the crooked places straight. Isa. 45.2.”

Then on the facing page there’s a verse decorated with drawings and borders:

“If the way seem puzzling,
And we long to know
Which would be the 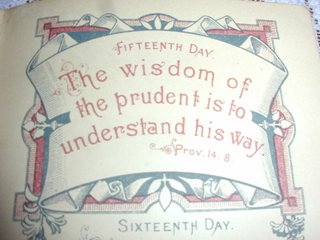 pathway
He would have us go,
Then the promise shineth
With its golden ray,
‘I will go before thee,
I will show the way.’—A.F. Purdon.”
Posted by Mama Squirrel at Saturday, October 14, 2006

What pretty books! I especially like the little devotional.

Thanks, Mother Auma! I'm very fond of these books.

Tim's Mom: Yes, they're all different in the books I have.

Oo..purple nail polish! ;) I think this post just gave me fodder for my own blog. I love collecting beautiful, old books. You've got some nice ones.

That's the Apprentice's purple nail polish, not mine. :-)