50 or so things about Mama Squirrel

A friend requested a "list of fifty," so I obliged. Last updated December 2014, to get rid of the dead You-tube links.

11. At one time or another I played piano, guitar, viola, clarinet, and recorder.
12. I never took guitar lessons but I strummed at a lot of campfires.
13. I went through more clarinet reeds than anyone else in ninth grade music (braces chew up reeds). 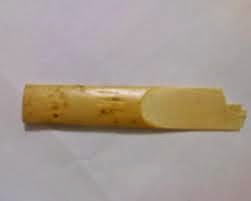 14. I took piano lessons for eight years.
15. I played keyboard in the school jazz band. We all wore black football jerseys (it was a choice of that or tomato-coloured cardigans).
16. I also played keyboard and sang in a trio with two other friends (we sang at church).
17. I also played the piano for Sunday evening hymn sings. I used to hyperventilate at anything with more than three flats.
18. I don't own a piano now. 2011 update: we now have an electronic piano, so that's good.

21. I used to do temporary office work.
22. I was fired from my first assignment because I couldn't keep the employers' names straight (most of them had the same last name. Was that Irv, or Herb, or...)
23. I would do just about anything as long as it was legal.
24. I once got paid nine dollars an hour to sharpen pencils.
25. Once I retyped a whole newsletter because the guy who hired me ran out of real work for me, and he needed me to look busy when they brought clients through.
26. I typed hours of transcripts about mental institutions and manic depression. By the time I finished I could discuss Lithium with the best of them.
27. I also typed transcripts for close-captioned TV. Fraggle Rock and The Beachcombers, Just Like Mom and The Edison Twins. (Finally got paid to watch TV.)

28. My first computer was a used KayProII. It had two floppy drives, and had no graphics at all. (Even its games were made out of x's and o's.) It came with a lot of CP/M software like WordStar. I bought a dot-matrix printer to grind out my essays...slowly.) 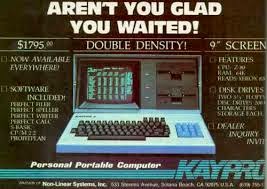 29. We sold it to a little kid down the street the year we got married.
30. Then we had a small laptop for awhile--good enough to type minutes of meetings. (In WordPerfect--without Windows.) And we could dial up the library with it and put books on hold.
31. Then came the Internet and also Mr. Fixit's expanding ability to cobble computers together. We're now running a setup that can switch from XP back to Milennium if we ask it to, plus we have a "virtual PC" so the kids can run their Windows 95 software. And I finally learned how to use Word...

From Toronto to Here

32. I lived in Toronto during most of my university years.
33. The Kaypro and I lived everywhere from a university residence to an elegant Forest Hill mansion (that lasted two weeks: the landlady turned out to be senile), to a cockroach-infested highrise (one summer), and half of a dark, depressing basement (one year), two doors down from Bea Lillie's birthplace.
34. I loved the subway, BookCity, cheap movies, Toronto Island, and being able to go to the museum any old time. 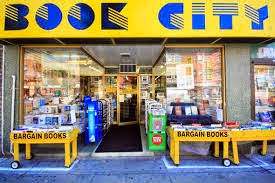 35. I didn't love the high rents, the cockroaches, and when the sewer backed up all over the basement.
36. I moved out of Toronto and found an upstairs apartment with a window and no vermin. It also had no bedroom and no bathtub, but I figured it was a small price to pay.
37. Besides, that's where I met Mr. Fixit. (No, not in my apartment, but after I moved.)
38. We met in July, were engaged in September, and got married the next June.
39. Our first real date was playing mini golf. We also went to a Three Stooges film festival, an antique show, out for Chinese food, and just sat by the river and talked.
40. Some things never change.
41. We moved into our first house and found out for sure that we were going to have an Apprentice the same week that I graduated. I was a bit too busy to go to commencement.

42. Mr. Fixit and I both like old movies: anything from the '30's through the '60's, occasionally the '70's. Orson Welles, Peter Lorre, Veronica Lake. (But no musicals. One song per movie is about Mr. Fixit's limit.)
43. We also like '70's cop shows with lots of big cars and groovy clothes.
44. We don't have cable TV or satellite, but we have an antenna in the attic that gets the Canadian stations. 2014 update: we went on to free satellite channels for awhile, but now we are back to the basic few.
45. I am no good with machines. I don't even like noisy vacuum cleaners, and I never have figured out all the TV/VCR/DVD controls. That's why it's a good thing Mr. Fixit is around.
46. I hate cold weather.
47. Malls give me headaches.
48. At one time or another I took French, German, Latin, Italian and sign language. (Can you tell I'm running a bit low here...)
49. I am probably the only person who's had both Krakovianka and Coffeemamma over for a visit. But not both at the same time.
50. And...when I was eight years old I collected hockey cards. I knew the names of all the NHL teams. I saved up hockey card wrappers and sent away for a Hockey Card Locker to keep the cards in. I also had a 1975 Bobby Orr doll. (I still have the clothes, but the doll broke. We let Ken wear the clothes because they were cooler than his '70's fancy pants.)

Thanks, Jeanne! Are you back home yet or still trotting the globe?

Hi Mama Squirrel. You left a question on my blog about my red CCM Mustang. When I was a kid, most people called me by the nickname 'Randy'. If we did indeed cross bicycle paths, I'd be curious to know your identity, you can reach me via wlu.ca if you like. And I, too, have a tree fort in my yard.

I will email you.