This is my Grandpa, sitting in his Grandpa Chair sometime in the mid-80's. 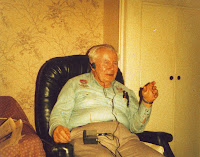 Those wires running down his shirt are not some kind of medical device. They're his Sony Walkman. I think he was listening to his learn-French tapes.

Grandpa would have been in his late 70's then. And tomorrow would have been his 100th birthday. He has been gone for fifteen years, since just before The Apprentice was born. 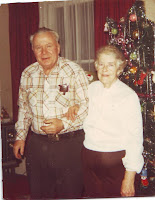 This is Grandpa with Grandma, I think a few years earlier--probably in the late 1970's.
When I think of Grandpa, I think of how hard he worked. I think about his metal lunchbox that he took to work at the Forge. He always seemed to be building, measuring, fixing, carpentering out in the unfinished end of the house that was his workshop. Summers at the trailer park, he did odd jobs for the owners--like fixing picnic tables.
And I think of how much fun he was. I think of him tapdancing. I think of him sneaking crackers to the overweight poodle. I think about his limburger cheese and Braunschweiger sausage, his row of alarm clocks at the head of the bed, his Western shirts and his Blue Jays baseball stuff and his elephant collection and his steam train obsession. At one time he used to run a steam tractor in the Steam Show parade.
I think about his stories of riding the rails during the Depression, before he was married. He went all the way to Quebec, looking for work. Years later, he was still determinedly trying to get beyond "Comment vous portez-vous aujourd'hui?"
I think of the way he used to fuss over the grandchildren. He was always worried that we were going to fall out of bed or choke to death on a gulp of Kool-Aid or something.
I think of the ways he used to drive Grandma crazy, any way he could. When his arthritis got bad, he had a long gripper on a stick to pick things up with. Of course he tried to pinch Grandma with it. He thought it was funny, even if she didn't.
I think of them doing crosswords together.
I think of the way he would tell me--for the millionth time--"I used to push you under the trees." (That's not as violent as it sounds--he meant in the baby carriage.) Even when he didn't remember much else, he remembered that.
I think of the smell of pipe tobacco.
I miss him. 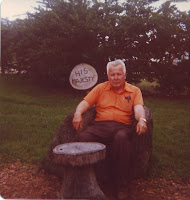