Besides waiting for some predicted snow...this morning we had lots of reading.

We sang O Canada in English and French. Crayons is just beginning to learn the French words, so she mostly listened to that part.

We sang through the books of the Old Testament. Then Mama Squirrel sang it with "empty spaces," which Crayons had to fill in.

Mama Squirrel read a passage from the Gospel of Matthew.

We read a hymn by George Herbert ("King of glory, King of peace / I will love thee") and some of Longfellow's Evangeline.

We read a chapter (M.S. read, Crayons listened) about Alexander the Great. King Darius (the third) counted up all his troops by ten thousands, and took an inventory of all his shiny war stuff, in preparation for a battle with the Macedonians. When he asked the opinion of an advisor, Charidemus, Charidemus told him that what he needed was not more equipment but some well-trained Macedonians. King Darius responded, of course, by having Charidemus executed.

We reviewed where Alexander and King Darius fit into our big timeline; also Daniel (who lived during the time of Darius the first), David, Solomon, and George Washington.

We read two chapters from our new natural history book, The Loghouse Nest, about chickadees and cardinals. 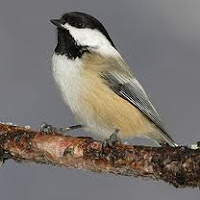 We don't have much left for this afternoon except for copywork and science. We might fit in some Brahms. Also some crocheting--Crayons is making a hamster. Really. And she has some homework: one page of math, plus reading from The Prince and the Pauper.

Image from Wikipedia.
Posted by Mama Squirrel at Monday, April 23, 2012