What's up today in the Treehouse?

1.  I'm trying to get used to Blogger's new interface.  I feel like someone redecorated my house when my back was turned.  (Is that what the DHM meant about feeling like someone reorganized her kitchen?)

2.  The Apprentice is almost done her first-year exams.  I think she has one left next week.

3.  It's a teacher-development day for the public schools, so Ponytails is out sewing with some homeschooled/previously homeschooled friends.

4.  Tomorrow is our last crochet class.

5.  Tonight and tomorrow are the big annual used book sale.

6.  Mr. Fixit has been hunting old radios lately.  He bought one to fix up called a Tombstone.  (When he told me he wanted to get a Tombstone, I was a bit worried until he explained.) 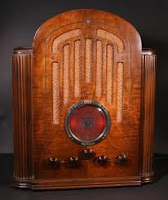 Email ThisBlogThis!Share to TwitterShare to FacebookShare to Pinterest
Labels: crocheting

You do know that you can revert to the old interface if you want, don't you?