Sometimes tracking down childhood toys, especially dolls, can be stymied by the names we gave them; we know that we named a favourite doll after a friend or someone in a book, but we don't remember what it really said on the box.  Usually the box is long, long gone anyway.  I had a drink-and-wet doll that always went by "Bat Baby," named not after the superhero but because I had pointed at her in a store just before Christmas, when I was almost two, and asked for "bat baby."  I think she was a Horsman doll, but it's hard to tell because, like a lot of inexpensive dolls of that era, her pretty blonde hair quickly acquired the texture of a pot scrubber.

The doll with the red-and-white stripes was called Rosemary.  I have no idea if that was her real name.  (That's a visiting friend holding Rosemary and wearing the luffly hat.  I'm the one in the fedora.) 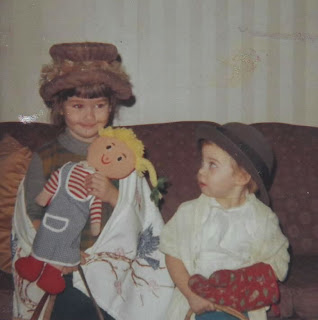 The doll in the photo below was always called "Kimmie."  I assumed that I'd named her...or someone had...after my cousin Kim. 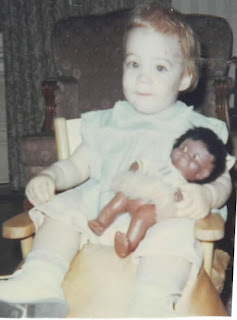 Turns out the doll actually was a "Kimmie."  She was one of a line of very popular Native-costumed dolls sold by Regal Imports in the early 1960's.  Well, once in awhile you get lucky. 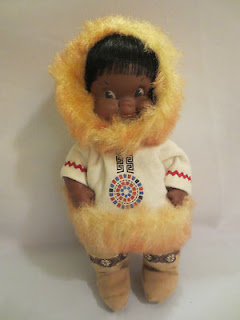