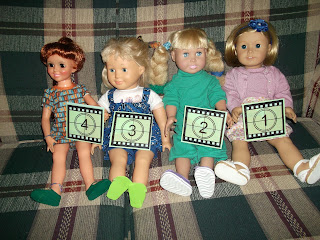 Part One of the math posts is here.
Part Two is here.

"Finally, in a world that is already too utilitarian, too unpoetical, too competitive, analytical and computer-driven, why and how should a "human curriculum" promote mathematics?  And what kind of mathematics?  Where do our middle-schoolers, somewhere in the transition between elementary mathematics and senior-high algebra and geometry, fit into that vision?  Those are the questions.  Stay tuned for an attempt at some answers." ~~ Part Two

I used that word "attempt" advisedly, because I do not have enough knowledge of what's out there to separate the "CM-friendly" curricula from the rest.  Yes, we've tried a few math books and resources over the years, and there are a few middle-school possibilities in the cupboard; but I can't give an opinion, say, on the Life of Fred series, or Math-U-See, because I've never used them.  So this post is just about what's on Dollygirl's "math map" for this year.

The Deputy Headmistress posted a story recently about a family trip where the GPS was giving them trouble; it would announce that it was time to "turn right" without warning, and the driver had to make a lot of sudden sharp turns.  I feel like my math GPS has been doing the same thing recently!  Sometimes those turns turn out to be a good thing, even if you could have used a bit more preparation.

PLAN A:  With the thought that we should both keep the math curriculum "simple" and "straightforward" this year, as well as getting Dollygirl accustomed to using a math textbook and working more independently, I planned that we would start the year by finishing the Key to Percents workbook series she had been using last spring, and then move into our somewhat-vintage copy of Saxon Algebra 1/2 (a conglomeration of arithmetic review, pre-algebra, and a bit of geometry and business math).  Based on previous experience, I didn't expect that Dollygirl would be getting through a lesson every day, but I thought that two lessons a week would be about right, and that would also give us an extra day to write Saxon tests (every few lessons) and also work on old grade 7 Gauss contests.  It's really not a bad plan.

A MONKEY WRENCH IN THE WORKS:  The trouble I'm having with Saxon, without even having started the year yet, is not so much those legendary long practice sets.  I think Dollygirl could actually benefit from the consistent review in those.  It's two other things:  the way the lessons are explained (awful), and the sequence in which things are introduced (all over the place).  I tend to side with Charlotte Mason in thinking that, although arithmetic skills like fractions come into play in algebra, you do need to understand that algebra is a separate kind of math, a "game" with its own rules; and that geometry is also a separate topic, although you can use both algebra and arithmetic to solve geometry questions, and when you do high school algebra you need to know coordinate geometry. Yes, the topics intertwine, but making a mishmash out of them too soon may not be the best approach for those of us who need to keep that math road map in front of us.  Those who drive by instinct may have time for sightseeing, but the rest of us need to keep the routes straight.

PLAN A and a Half:  The World Book Typical Course of Study seemed to cut things down to a reasonable amount in the language arts area; I decided to check out the 7th Grade Math.  Again, crazily enough, I think World Book provides a pretty good list of skills for this year!  The really crazy part is that those are the topics covered in the Saxon book too.  Only Mr. Saxon does them in an order that makes sense only if you already know what makes sense.  The Bible verse "Parents (math teachers), do not exasperate your children (students)" comes to mind.

PLAN B:  I have decided to give Plan B a chance, and if it doesn't work out, or we've had enough of it after a short time, we'll go back to Plan A.  Plan B is to proceed with Key to Percents through September, as planned; and then to work through three short, friendly math books that I downloaded to the e-book reader when they were offered as freebies.  The three books seem to complement each other and don't have too much overlap (otherwise I would use only one or two of them).  If they go too fast on any of the important topics, we'll slow down and use other resources (books or online sites) to do some extra exploring.

The books are:
Discovering Mathematical Thought: Growing the Math Side of the Brain, by Hal Torrance.  The value of observation, and the creative side of problem solving.  Topics include probability, proportion, estimation.
Beat Algebra Before It Beats You, by Hal Torrance.  This is not a book about doing algebra; it's a review of topics such as composite numbers and multiples, fractions, percentage, exponents, etc., that you need to have solid before starting algebra.
College Math Concepts for Middle School Students:  A Stress-Free Approach to Broad Math Understanding, by Hal Torrance.  Another run through number patterns, basic arithmetic review, integers, and estimation (he loves estimation).  There are also lessons towards the end on mean, median and mode, simple probability, and geometric reasoning; we might leave those for later in the year.

And by that time, I think Dollygirl will be ready to tackle the first chapter of Skill in Algebra on TheMathPage.com.  There's also a chapter of "younger" algebra activities in the book How Math Works.  If the Torrance books, or the extra work we need to do to get through them, require the full year, then algebra can wait till Grade Eight.
Will we get to any real geometry this year?  Or have time to do much with measurement?  How many mountains (or highways) can we climb up (or drive down) in one school year?  The answer is: I don't know.  It's a new journey; I can plan the trip, but I can't give you the report until we're actually on the way.

Interesting to read your evaluation of Saxon Algebra 1/2! For me, that's when math finally "clicked." My mom used a variety of math resources up until then, and I never liked math or really felt like I understood. Then, she gave me that Algebra 1/2, and I insisted that we stick with Saxon forever after.

I loved it so much, that I was sure that was what I would use with my own children someday. One friend ordered Saxon's first book to use with her little ones, on my glowing recommendation... and she cried when she saw it. I don't use Saxon in our family. But it was the key to math for me at one point!

Well, we could still end up using it. My concern is that the somewhat miscellaneous arrangment of topics is going to leave Dollygirl in more of a muddle than ever.

Just before I read this, I read the post on the Common Room about learning styles. I had never seen them classified in the categories that include "sequential" or "random," and I couldn't grasp how I would fit in there. Maybe I'm a random learner? And that would be why Saxon spoke to me?