Countdown to school: Handicrafts are not just last week, but completely yesterday; and that's a good thing 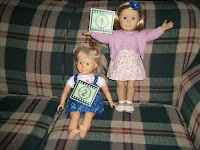 Charlotte Mason once complained that "we turn out young people sharp as needles but with no power of reflection, no intelligent interests, nothing but the aptness of the city gamin."  Gamin(e) mostly makes me think of Halle Berry's hair, but in this case it means a street urchin, a kid who hangs around the corners--an Artful Dodger.  Someone who knows the ropes, but not much else.  Like the Country Mouse and the City Mouse, the gamin is at home in only one environment, in this case a somewhat artificial one.  The "country mouse" child might have an equal amount of ignorance when visiting the city, but I think Miss Mason's idea was that the country, at least, offered something real, more worthwhile than just knowing how to get around the subway system.

"Real" handicrafts, in Parent's Union School terms, were the old-fashioned ones; the ones that often, these days, you have to go to a pioneer museum or get into Creative Anachronism (re-enactments) to see.  Many of our children, by comparison,  are more like "city mice" when it comes to these skills; because, unless we're homesteading or living somewhere outside of typical Western culture, we don't need them so much anymore.  Even knitting goes in and out of style; it's just an option, a flourish.  We might make our husband a pair of socks, but we don't need to.

But going back through the centuries, back to Mrs. Proverbs 31 who sold sashes, and the tabernacle and temple artisans, human beings have always made stuff.  They worked with metal, made pots, turned bowls, painted lions on gateways, made toys, made leather goods and baskets, decorated fabric and scrolls, carved clocks and gravestones.  They made beautiful gardens, ornamented weapons, turned earrings into golden calves and hunks of rock into lifelike human images.  If this is a time in history when there is no real motivation for most of us to create or decorate, then it must be the first time ever.  Maybe it's just a blip.  In some parts of the world, selling crafts is a means of survival. (For feminists, knitting and other crafts are an angry kind of reclaiming of womyn-style, that, so to speak, separates the girls from the boys.  But we don't have to go there.)

Is there a specifically Christian, justice-seeking, God-honouring approach to both art and crafts, that speaks honestly to our life now, rural or urban, in 2013 (because, for most of us, times have changed), but does not settle for cheap and easy?  How should we then live?  Do we all have to be Greenbeans in the Garden?


What if we have no woodshop, no parent with sewing skills, no resident artist?  No kiln?

Well, we have air-dry clay.

We have gallery and museum classes.

We might have church ladies who quilt, sisters who knit, uncles into reenactments.

We have conservative Christian homeschool resources aimed at turning out boys who can provide and girls who can preserve.

We have Titus-Two-type online mentors who blog, and people like Edith Schaeffer who wrote a recollection of their first Depression-era apartment, including the morning glories hanging over their otherwise-dreary rooftop patio.  Dreariness is something lots of city people still "get."  Morning glories are still around.  Why not?

If we don't need to craft for ourselves (maybe we have a tiny living space, or just like things plain), we could learn...and teach our children...to knit and sew for homeless shelters or crisis centers.  Or, like Proverbs 31, we might come up with a craft-selling business (if we can find our way around all the regulations these days).  The Etsy era might be a blip too, but a lot of people are making the most of it.


Gammy hitched herself alertly to the edge of the bed and put a clawlike hand on Di's hair. "Sort of carroty but real slick. That's a pretty dress. Turn it up and show me your petticoat." Di obeyed, thankful that she had on her white petticoat with its trimming of Susan's crocheted lace. But what sort of a family was it where you were made to show your petticoat? "I always judge a girl by her petticoats," said Gammy. "Yours'll pass. Now your drawers." Di dared not refuse. She lifted her petticoat. "Humph! Lace on them too! That's extravagance. And you've never asked after John!" "How is he?" gasped Di. "How is he, says she, bold as brass. He might be dead, for all you know." ~~ L.M. Montgomery, Anne of Ingleside

Email ThisBlogThis!Share to TwitterShare to FacebookShare to Pinterest
Labels: 2013 Back to School, Crafts, Edith Schaeffer, Hidden Art of Homemaking, justice, MCC, Proverbs 31, sewing, times are tough all over

I love the chapter in Exodus 31 where the Lord said of the craftsman Bezalel, 'I have filled him with the Spirit of God, with skill, ability and knowledge in all kinds of crafts...' this type of skill is also associated with wisdom in the Bible - we've lost that idea I think.