Weather: still hanging in there, colder but still not quite "November." That could change.

News from the Squirrels: Lydia's school is having a Flop, Drop and Read day today (you were also supposed to wear pajamas to school). Sounds like they have been taking lessons from the homeschoolers.

Things we've been watching: We finally started the fifth season of Downton Abbey (I was on a waiting list at the library). Longmire. Death in Paradise. Two movies: Steven Spielberg's Super 8, and Finding Forrester (we'd seen that a long time ago, but it was worth watching again).

In the slow cooker: Chicken Cacciatore, from our freezer meals.

Also to eat: Applesauce Muffins, made from dry ingredients mixed ahead for Crockpot Applesauce Cake, but since the Crockpot is full of dinner, I did mini muffins instead.

What are the best deals at the dollar store? These candles-in-a-jar, sold for religious purposes. The pictures on them are just shrink wrap and come off easily. I bought four candles for an Advent decoration. (They're going to get some trimming.) 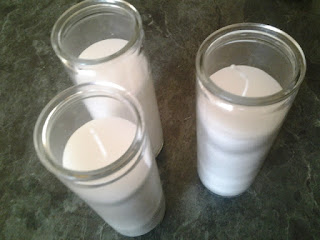 Using up thrift store finds: Do you remember this ribbon embroidery kit and the diecuts of Victorian children? (I thought they were stickers but they were diecuts.) 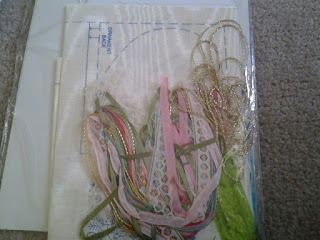 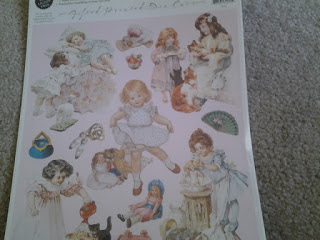 I used them, along with a few other cutout photos, sticky letters, buttons and ric-rac, to make Christmas cards. The base for the cards was a package of blank watercolour-paper cards that we had bought several years ago and never used. 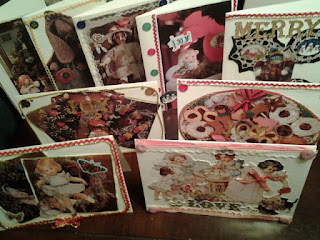 Also making: crocheted pinecones, with a pattern from Planet June. (I downloaded the pattern a couple of years ago and then didn't have a chance to use it.) I had a bit of brown yarn left from old projects, and then I found this strange-scratchy-textured stuff at the dollar store while I was buying the candles. I don't think you'd want mittens made out of it, but it's perfect for cones. 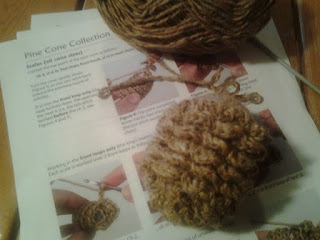 How funny--I just shared those pinecones on my blog this week, a bit wistfully since I do not crochet. :)

I use those "novena candles" (that's what we call them because they supposedly burn for nine hours) for our Advent "wreath" too. I sewed little sleeves that fit them years ago and reuse the sleeves every year on new candles. (You can see a peek in the very background here: http://joyouslessons.blogspot.com/2013/12/a-time-to-prepare.html )

I love the collage Christmas cards. That would be a fun project for my older girls and me!