1. What's surprised you most about your life, or about life in general?

That I find myself middle-aged, so soon. When I read stories about fiftyish women, or see magazine stories about "makeup/health/whatever for those over fifty," I realize they're actually talking about me.

Other than that: technology. 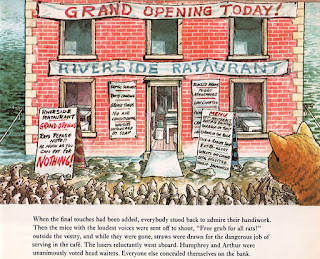 The Church Mice Adrift, by Graham Oakley: a rat cafe?

2. Among others, these ten words were added to the Oxford English Dictionarythis year...awesomesauce, beer o'clock, brain fart, buttdial, cat cafe(apparently this is a real thing), fatberg (gross-read the definition here), fat shame, hangry, Mx (gender neutral), and skippable.
Your thoughts? In looking over the list, which word do you find most ridiculous? Which word would you never in a million years say out loud? Which word would you be most likely to use in conversation?

We prefer to say "pocket dial" when referring to making an accidental cell phone call. Recently Lydia pocket-dialed Mr. Fixit, and he could see that it was her number, but there was nobody on the line, so he  said, "Ly-di-a, this is the little man living in your pocket, I'm talking to you" and a few things like that. (I don't remember if she said anything about it when she got home from school.)

"Hangry" sounds like a situation that's always been there, just waiting for a word. It could cover anything from a child's church-went-too-long-and-I-want-my-lunch grumpies, to something more serious, like unrest during a famine.3. Do you like gravy? Is there a food you'd rather not eat unless it comes with gravy? Do you make your own or buy the canned or store-made variety? Turkey and gravy, sausage gravy, mashed potatoes and gravy, country ham and red eye gravy, biscuits and chocolate gravy, pot roast and gravy...which one on the list is your favorite?
I never heard of sausage gravy until I was an adult; people around here eat fat sausage with sauerkraut, or skinny ones as a side with pancakes and syrup. But never with gravy. Gravy for us is what you have with roast beef or turkey, and that's about it, unless you count poutine, and I try not to.

But I do know that you can make a pretty good vegetarian gravy with water, milk and soy sauce thickened with cornstarch.
4. Do you have a plan? Do you need a plan? Have you ever had a plan fall into a trillion pieces? Explain.
Homeschooling and having young kids in general gave me lots of outlets for planning: school needed plans, holidays needed plans, groceries needed plans. It didn't mean that I always stuck to the plans, but at least I knew they were there in the first place.

I still make plans (that's why my little zippered book is my planner, not my journal or some other name). Right now I'm in the middle of a holiday crafting plan, a book project plan, and the plan for how I'm going to finish this post in the next five minutes and get out the door for a church work day.
5. November 19 is National Play Monopoly Day. Do you own the original or some version of the game? Do you enjoy playing Monopoly? How likely is it you'll play a game of Monopoly on November 19th? Ever been to Atlantic City? Ever taken a ride on a railroad? Is parking in your town free? Last thing you took a chance on?

Our oldest owns the original Monopoly (so it's at her place), but we have Canad-opoly in the cupboard, and also the new version (Monopoly Empire), Monopoly Deal (card game), and we used to play Monopoly Junior when the girls were younger. One year we had a Monopoly Junior birthday party for Mr. Fixit, and when he landed on certain spots, we had entertainment or activities relating to that place.
For people who do a lot of "frugal," you would think we were a bit obsessed with money. But I think most of those games were gifts...except for Monopoly Junior, we got that at a thrift store. 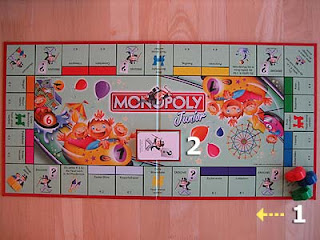 Whoops, five minutes are up. Better half a Hodgepodge than none at all.

This post is linked from Wednesday Hodgepodge with Gravy at From This Side of the Pond.
Posted by Mama Squirrel at Wednesday, November 18, 2015

I'm surprised by my age too. I sometimes walk by a mirror and realize I'm older than I think I am : ) Enjoy your work day today!

I'm trying to track down some of the Graham Oakley books I got from the library when our kids were little. Now they've been replaced by more modern (and not nearly as clever) books, and I can't even find them in the bigger children's bookstores. So off to Abebooks and Alibris I go to hunt for them. They were wonderful books, as were the William Steig books. Fortunately, I do have those. Anyway, enjoyed your Hodgepodge. :-)

My kids are young, so it's shocking that I have friends with kids heading off to college and they didn't have them until after college. I have to remind myself how old I am sometimes.

Sausage gravy - yum. So good with bisquits. Here sausage gravy is made with breakfast sausage. You make a cream gravy with sausage cut up in it and usually put it over warm bisquits.

My Dad suddenly remembered sausage gravy when I was in high school, he'd done some college in Georgia. If I remember rightly, that was the same year he had a toothing for cheesy grits.

Sausage gravy on tall biscuits became his Saturday fancy breakfast when people were visiting. They were delicious, but so rich that half a plate lasted until lunch.