Books I finished reading this year: up to twenty 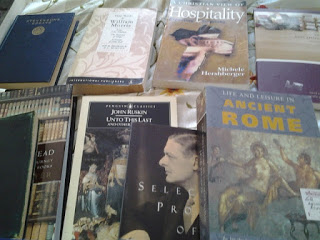 I have a GoodReads reading challenge this year of 47 books. (Don't ask me why, it just worked out that way.) I've read 20 books (almost halfway there), and some of the books I ended up reading were not the ones I planned; but that's okay. Re-reads aren't on the list, but I do go back; at least three books I spent time with this year "didn't count" because I had read them before.

A Place in Time: Twenty Stories of the Port William Membership
Berry, Wendell

The Housekeeper and the Professor
Ogawa, Yōko

Telling the Truth: the Gospel as Tragedy, Comedy, and Fairy Tale
Buechner, Frederick

Sailing the Wine-Dark Sea: Why the Greeks Matter
Cahill, Thomas

MFA in a Box: A Why to Write Book
Rember, John

Sailor and Fiddler: Reflections of a 100-Year-Old Author
Wouk, Herman

Twenty Things You Should Read
Edwards, David B.

Scaling Down: Living Large in a Smaller Space
Culbertson, Judi *

The Introvert Advantage: How to Thrive in an Extrovert World
Laney, Marti Olsen

Let's Play Math: How Families Can Learn Math Together and Enjoy It
Gaskins, Denise *

(I guess what I've read this year in Plutarch counts too?)
Posted by Mama Squirrel at Tuesday, August 23, 2016