Day...two. (On garbage restrictions and making things out of nothings)

The number Two has a particular significance right now in terms of Stuff. In a very few weeks, our area moves to limited garbage pickup, and we will be allowed the equivalent of two fifty-pound garbage bags per week, and garbage over the limit will have to be tagged with (you guessed it) Two-dollar bag tags. Except that the idea of a fifty-pound garbage bag seems excessive, especially since they also have a rule (quite logical) that the bag has to be able to hold whatever's inside it. Right now a limited pickup seems weird and hard to get used to, but I suppose it will be like the introduction of always having to use telephone area codes from a few years back: after awhile you can't remember what it was like just to type in a seven-digit number.

So the question is not only how we are going to be able to master the art of packing and lifting fifty-pound garbage bags (says I, who have never in my life had to weigh garbage), but (more relevant) what's going or not going inside those bags. Which comes back to the questions of what we buy, what we use, how we use it, how we dispose of it. Because if we buy a thing, at some point it, or its outsides or insides, are going to be left somewhere. And obviously, the fewer things that end up in those Two bags, the better.

For us, the main alternative is going to be the Green Bin (food waste, paper napkins, pet bedding).

The second strategy is something we already try to do: use things longer and in different ways so that we don't have to buy as many new things. I am not of the school that thinks hot-gluing dried-out pens in a wreath shape makes a pretty wall decoration (if you remember a certain book review I wrote awhile ago); but I do hang onto things and try to make them work in new ways. The photo below was our not-quite completed hall decoration this Christmas (I added some red beads to the cups later on). The inner and outer glass jar parts were bought several years ago, and the bits and pieces inside the jar were a lot of absolutely useless trimmings from old thrifted candle rings. It's sitting on one of those wicker holders you use with paper plates, surrounded with pinecones cut from more candle rings, and tied with some ribbon that came on a gift. I even had the red candle in our stash. The doily and cups were inherited from Mr. Fixit's grandma. 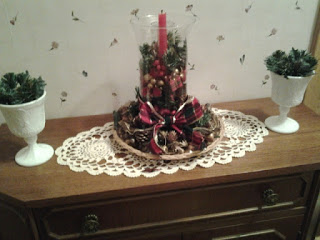 More to the point of this post: Where Is It Now? As of yesterday, the cups, doily, and flat basket are back in the cupboard. I stored the ribbon and pinecones...maybe we'll use them again. The jar full of trimmings is also in a cupboard. I may use it as-is next Christmas, or maybe not.

The third strategy, and one that I think we may have more trouble with, is using fewer containers that have to be disposed of. Buying refill or bulk options, things like that. I like mixing my own sloppy joe and taco seasonings (and there's no package to throw away), but it's never been under coercion. We don't shop at warehouse club stores, or buy the giant economy size (especially with just three people, one guinea pig); but we may have to double-think anything that comes in a non-recyclable box.

Will the Limit of Two make much difference to the way our Treehouse runs? I'm trying to see it as a learning opportunity rather than an annoyance...and it's not like we have a choice in the matter. So stay tuned.
Posted by Mama Squirrel at Monday, January 02, 2017