As Schoolhouse Rock used to say, three is a magic number. Three Squirrelings. Three meals a day. The number of a current writing project. Faith, hope and love.

Three threes make up Project 333, and by an interesting coincidence we just watched the documentary Minimalism last night. Courtney Carver, the originator of Project 333, appears in the film, talking briefly about what propelled her into a more-with-less lifestyle. I've been trying to follow a Project 333 plan for the past year, so this is a good time to think about what's working, why I'm doing this, and what's ahead. 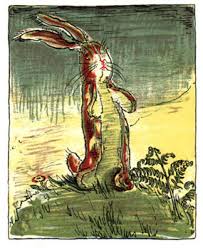 One of the people interviewed in the documentary said that the problem isn't that our culture isn't too materialistic, it's that it's not materialistic enough. She meant that we are so surrounded with so much stuff that we don't properly appreciate any of it. In the days when children's toys were expensive and scarce, a stuffed rabbit (let's say) became a cherished possession; but now (says one confessing much experience of this particular overload), decorators show us how to hang a hundred stuffies in grape-like bunches from the ceiling. I saw a photo like that yesterday, and it made me wonder where the child fit into that picture, and if he ever really noticed the toys again once they were strung up like that. I wondered if he had one or two held-back "friends" for company down below.

Deliberately limiting the number of clothes we wear is somewhat artificial, a response to a first-world problem. But it's a step towards, maybe, a healthier relationship with "stuff." Janice at The Vivienne Files is starting a no-shop year herself.  There is a lot of freedom in saying "I have enough."

This isn't a no-shop year for me; I'm still filling in some gaps, mostly for the warm weather that will eventually arrive here (said hopefully on a dreary January day). I might even do some thrift-makeover sewing if I find something interesting to work with. But I think it's going to be a year of trying to focus in, of "use it or lose it."

I am enjoying this series. Yes, more- with - less speaks to a whole different issue than simply minimizing doesn't it? We are clearing corners and moving things along, keeping those treasures that we love and have a place in our lives not just finding space to store more and more.
~lisa
Happy New Year Friend!!