1. Growing up, were you close to your grandparents? Tell us one or two specific things you remember about them.

I've written about my mother's parents before, here and here. The biggest thing was that they were always there. They were a dependable, constant, steady presence. That doesn't mean they couldn't come up with surprises ("we're renting out our house for the winter and going to Florida this year"), but their there-ness never changed, even through hard things. A lot of things remind me of them, including the bags of marshmallow bananas at the discount store.

2. What's an item you were attached to as a child? What happened to it? 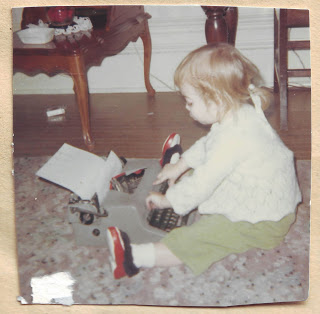 My dolls, including a Crissy I got for my birthday when I was six. I should have taken better care of her over the years, but she and some other toys were put into a storage area that was abused by a family cat, and let's just say that almost everything in there had to be put to the curb. That was years ago, and I didn't expect to have another Crissy...then Lydia, the Squirreling formerly known as Dollygirl, was given her own vintage Crissy, and I had fun reconstructing some 1970's clothes for her.

3. When you look out your window, do you see the forest or the trees (literally and figuratively)? Explain.

The whole deal. We're on the fifteenth floor.

4. Do you like sour candies? Which of the 'sour' foods listed below would you say is your favorite?

Have you ever eaten a kumquat? What's your favorite dish containing one of the sour foods on the list?

Sauerkraut is a staple around here. We go back and forth between the fine-cut Bavarian style and a coarser Polish type. They're both good.

Lemons? Lemonade. Buttermilk? Pancakes. The rest are good too.

But I haven't eaten a kumquat in years.

One two three four five six seven eight nine ten eleven twelve fourteen fifteen home. (I didn't have to cheat there because we don't have a thirteenth floor.)

Linked from The Wednesday Hodgepodge at From This Side of the Pond.
Posted by Mama Squirrel at Wednesday, July 19, 2017

Hi! Stopping by from the HodgePodge! I like sauerkraut also. I think it one of those foods that you either like it or hate it. Haha. There is no middle ground on sauerkraut. Your photo for your blog title is very nice with the clear balcony sides. I am a bit fearful of heights so it would be hard for me to live on the 15th floor! :-)

Love your typewriter picture! It doesn't surprise me that this was a favorite item. I grew up learning how to type on a typewriter (computers were just being made available to the public, but they were not user friendly). There's just something about the sounds of an old fashioned typewriter! GREAT memories!

Enjoyed your answers, but I do think you were cheating a bit on the last one ;)

My sister had a Chrissy doll and we cut her hair : ) Kind of defeated the purpose of the doll, who had the hair you could pull out to make different lengths! Hope you have a great week!