In which Ponytails chooses the menu (plus another frosting recipe)

Ponytails had a birthday this week.

Since she has not worn ponytails for some time now, she is trying on other possibilities for blog names. Stay tuned for that. 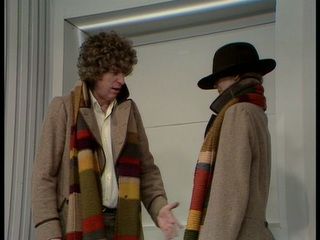 This was the birthday dinner menu she chose: 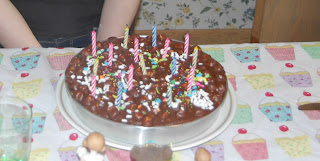 I adapted the Cocoa Fudge Icing recipe from More Food That Really Schmecks. Here's my version.

In a saucepan, combine the sugar, cocoa, and milk.  Add the butter or margarine, and stir over medium heat until it comes to a boil.  Boil for one minute, then remove from heat and cool as quickly as possible, by putting the pot into a bowl of ice cubes or a sinkful of cold water.  Add the vanilla and extra additions (butterscotch chips, marshmallows), and stir hard with a wooden spoon until the frosting has thickened  and looks like soft candy.  The marshmallows aren't meant to melt completely.  If the cake is still too hot to ice, you can put the frosting into a bowl and leave it in the fridge until you need it.  We left the cake in the pan and just covered the top of it with the frosting, then added some sprinkles and candles.

Photo of Dr. Who and Romana found here.
Posted by Mama Squirrel at Wednesday, September 19, 2012

I always find it interesting to see what kids choose when they get a choice. Sometimes it is really surprising what they actually like.