This week will be a full one, and we have a couple of extra things to fit in.  The free lunchtime concert on Tuesday is going to be a woodwind quintet with members of the local symphony orchestra.  And some homeschoolers we know are putting on a performance of The Pushcart War this week, so we bought tickets to that.

We are up to the hardest type of math questions in the practice Gauss competition pages.  When I've marked Gauss contests over the years (they're multiple choice and you get an answer key), I've noticed that most students answer all the A questions, most of the B questions, but usually only a couple of the C questions.  They take longer and you have to think harder about solving strategies; they often involve hypothetical dice or checkerboards or number patterns.  They're grade seven or eight questions (the Gauss has two levels), but they're fiendish ones. 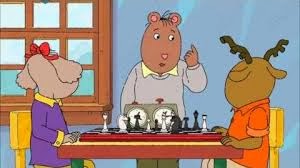 Science:  we read about Kingdom Monera last week, and this week's readings are about the other Four Kingdoms.

English and French history:  Stephen's reign, although Mr. Arnold-Forster doesn't give him much page space. Some French kings from the same time (twelfth century).  (Virtual twelfth-century shortbread if you recognize the two people in the above photo.)

And the rest is just continuing what we've already been doing.
Posted by Mama Squirrel at Sunday, February 23, 2014