"Ultimately, the blank page makes us examine our thoughts for metacognition, and intrinsically, it insists upon space and time for learning." ~~ Laurie Bestvater, The Living Page

I've learned so many new words lately.  From going to free lunchtime concerts, I've learned quodlibet. From doing newspaper crosswords, I've added "olio" (a mixture of things) and "ana" (a miscellaneous collection of information). And while rereading Laurie Bestvater's chapter "The Grand Invitation," I had to look up "metacognition."

Metacognition is knowing about knowing, or thinking about thinking, or noticing that we are noticing.  So how does a blank page (in a notebook) make us examine our thoughts for metacognition?  Laurie says it's because it forces us to stop before we start.

It's like the difference between me grabbing a pencil and trying to fill in crossword blanks as quickly as I can, scanning for a few easy or obvious definitions that will get the thing moving, and facing a diagramless puzzle that begins with a blank grid and doesn't even tell you where to start.  You can't cherry-pick the easy bits on an empty grid, or on a blank page. 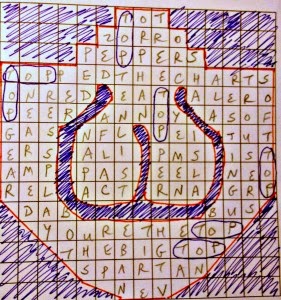 (not my puzzle--I found this one online)
But the advantage, rather than just the fearsome aspect, of a blank page is that it gives you space to learn. Laurie says (page 65) that it insists on it.  If our children should learn to run and climb and do all those gross-motor things that Charlotte Mason encouraged and that we're now finding out actually put little bodies in right relationship with the planet--that is, if we must find ways to give them physical space and let them find out what they can do in it--doesn't the same thing apply to other areas of learning?

Narration begins with silence. Silence, like blank pages, or a tree to climb, can be disconcerting.

One of my children was once handed a cassette recorder and sent off  to record some examination answers. In an attempt to cover up the fact that she couldn't remember anything about one particular story, she recorded a few words and then gave us several minutes of feigned static, via some noisy crinkling paper. The cassette recorder had inexplicably developed technical trouble.  And I believed it, for about twenty seconds.

But often it's the adults who don't welcome large spaces, white pages, silences.  There is some risk involved with these things.  Multiple-choice questions give you a defined start, a fixed stop, and, if they're to be computer-answered, you had better not colour outside the little circles.

It's a bit like imagining ourselves flying through the air, or sailing over the sea, or galloping across an open field, vs. staying on the footpath.  Yes, there are lots of places where habit and duty and reason make life easier.  Some things just have to be roads, rails, and structure, and that's a good thing too.  But here we're talking about giving our students' minds room to stretch, play, run, and fly. 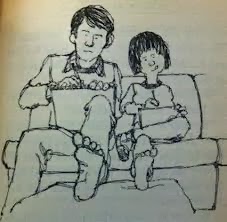 "Mr. Quimby set his cup down. 'I have a great idea! Let's draw the longest picture in the world.' He opened a drawer and pulled out a roll of shelf paper....Together she and her father unrolled the paper across the kitchen and knelt with a box of crayons between them.
'What shall we draw?' she asked.
'How about the state of Oregon?' he suggested. "That's big enough.'
Ramona's imagination was excited. 'I'll begin with the Interstate Bridge,' she said.
'And I'll tackle Mount Hood,' said her father....
Ramona glanced at her father's picture, and sure enough he had drawn Mount Hood peaked with a hump on the south side exactly the way it looked in real life on the days when the clouds lifted." ~~ Beverly Cleary, Ramona and her Father

Linked from The Living Page Discussion #5 at Wildflowers and Marbles.
Posted by Mama Squirrel at Wednesday, March 12, 2014

Haha! Inventive daughter you have there!

>> that is, if we must find ways to give them physical space and let them find out what they can do in it--doesn't the same thing apply to other areas of learning? <<

What a great observation! It's so true - we go out of our way to ensure that there is enough margin in a CM day so that there is "blank space" for them to explore and run. This idea doesn't stop with physical exploration. It's good to be challenged by a little blank space sometimes, I think. I wonder if CM realized this and it was part of her initial consideration? I'm sure she did. Your post reminded me that this "blank page" is analogous to the way I LET my kids be BORED sometimes - -it's good for them, it challenges them to get creative with their activity! I don't jump in after an announcement that boredom has taken over - I step back and give them time to consider that "blank page" and come up with their own pursuit. It seems there is much wise and purposeful letting alone here - both in physical activity as well as in metacognition. Blank space is purposefully set before the child to stretch them in creating.